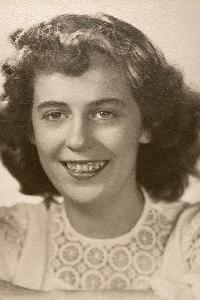 Marilyn M. (Peabody) Inglis, 89, of Middleboro died peacefully August 10 in Weymouth after a long period of declining health. For over 67 years, she was the loving wife of the late Ivan L. Inglis. She joins her parents, John L. Peabody and Rita (Cannon) Peabody of Rockland, MA, her sister, Arlene “Shirley” and husband Albert Dyess of Louisiana, sister Frances “Frannie” and husband Zenas “Doc” Adams of Rockland, MA, brother Robert “Bob” Peabody of Florida and daughter-in-law, Louise “Kula” Guzman of Biddeford, ME.

She is survived by her brother, Richard “Dick” Peabody and wife Ruth of Chatham and sister-in-law Sharon Peabody of Florida.

She also leaves her children; Stephen L. Inglis of Kennebunkport, ME, Lynn E. Walsh of Hanson, Thomas P. Inglis of Biddeford, ME, and Patricia “Trish” Birk-Smith and husband, Thomas Smith of Middleboro. She was the doting grandmother to 18 and great-grandmother to 25 and the “favorite aunt” to many nieces, nephews and strays who came to dinner and stayed as long as they needed.

Marilyn and Ivan lived in Whitman for five decades where they raised their children. She was a member of All Saint’s Episcopal Church where she taught Sunday School and was a member of many local community groups. After a long career in the insurance industry, most notably with the James Cutler and Brewer and Lord agencies in Abington, she joined the U.S. Postal Service.

Upon her retirement in 1995, the couple split their time between Palm Harbor, FL and Middleboro. They enjoyed traveling and spending time with friends and family. Playing bingo with her many friends at the Whitman Senior Center was a favorite pastime of Marilyn’s. She enjoyed knitting and shopping but most of all, she was an avid reader - sometimes consuming a dozen books a week. It’s no surprise she volunteered at the Whitman Public Library.

Family and friends are invited to attend her visiting hours on Monday August 23 from 5:00-7:00 PM in the Blanchard Funeral Chapel, Plymouth Street (Rte. 58 at the rotary) Whitman and her funeral service on Tuesday August 24 at 10:00 AM in the Chapel. Burial will follow in the Colebrook Cemetery, Whitman.