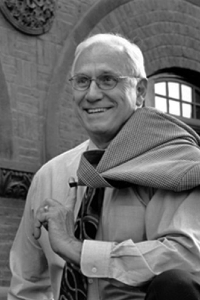 Described by a friend as a Renaissance Man, Kelly Wise’s forty-year teaching career was an anchor and a foundation for his expanding interests and accomplishments. Born in New Castle, Indiana, he received his BA from Purdue in 1955. Following subsequent service as an officer in the U.S. Navy, he received his MA from Columbia in 1959.

His teaching career began at Mt. Hermon School where he developed a challenging and beloved Novel and Drama seminar, coached his Indiana style of hoops, and began an art program with exhibits of student art topped off by a grand exhibit of Andrew Wyeth originals in 1965. He and his wife Sybil were dorm parents whose warm and welcoming home was a harbor for their students.

In 1966, they moved to Phillips Academy in Andover, MA, where Kelly created a filmmaking course in addition to teaching English, dorm duties and coaching. He created the school’s first residential cluster, was chair of the English department, and then Dean of Faculty, where he made it his purpose to recruit and hire more teachers with diverse backgrounds.

Beyond his talent and commitment as a classroom teacher, Kelly saw education as needing a shift to reflect the reality of public and private education. He was deeply concerned about the lack of diversity in the country’s teaching faculties and became the creator and driving force behind Andover’s Institute for the Recruitment of Teachers (IRT) in 1990. Founder, tenacious fund raiser, motivator, mentor, recruiter and executive director, Kelly’s IRT program thrived. He persuaded leaders in prestigious colleges and universities across the country to join his IRT consortium; he traveled the country recruiting minority college juniors to bring them to Phillips for a summer “boot camp” in the rigors of graduate school; he hired a diverse institute faculty; mentored every one of his alumni/ae 365 days a year and inspired 92% of them to go on to graduate school and pursue careers in teaching. Hundreds of IRT alumni have received masters and doctorate degrees and are on the faculty and administration at schools, colleges and universities. In 2009 Kelly was honored with a Doctor of Letters degree from Purdue University “in recognition of his inspired leadership in preparing underrepresented students for graduate education through his creation and stewardship of The Institute for the Recruitment of Teachers.”

Above all, Kelly was a scholar-teacher in the best Andover tradition. From his coauthorship of the English Competence Handbook to his senior level seminar, Novel and Drama, his standards were extraordinarily high. His seminar broke every rule on the length of assignments and the depth of his expectations. But never did a student complain; they just lined up for more and his class was sought after by students. He led them not only through the great literature that his voracious reading made available, but he continued to work his magic with regular Sunday dinners and film sessions where he and Sybil opened their home and hearts to students.

As he continued teaching, Kelly’s career expanded as an artist and photographer. His works are at the Harvard Fogg Museum, Boston’s Museum of Fine Arts and the National Gallery of Art. He authored and edited a number of books on photography, led by a brilliant study of the neighborhoods of Boston – City Limits. He also became fascinated with the Armenian church and authored, A Church, A People, where he depicted the culture of a humble local church and its parishioners. In addition to his own photography, he wrote as a photography critic for The Boston Globe and Art Forum, and broadcasted on National Public Radio, where he reviewed exhibits, shows and art installations. In 1976 Kelly began testing the Polaroid camera and his luminous book, Still Points, showcased his ingenuity and creativity with this new, instant medium.

Friends remember well the dinners at the Wise home which were “affairs” – with gourmet food from Sybil’s kitchen and good wine from Kelly’s wine cellar, wonderful conversation and friendship. The testimony of former students reveals the influence of this remarkable teacher on their lives with words such as nurturing, quiet kindness, intelligence, wit, standards of excellence, gentleman, legend, changed my life, a Blessing. One of his beloved students wrote, “I will always be grateful to have been thought of as special value…at a crucial point in my life when I could not see that for myself. You lifted my chin and I got a glimpse of where I might go.”

Beyond Kelly’s accomplishments, the love he shared with Sybil, his beloved late wife of 43 years, and their family was most precious to him. He will be dearly missed by his daughters Jocelyn Wise of Reading and Lydia Wise of Stoneham, son and wife Adam and Ann Wise of Brookline, and his grandboys Julian Wise, Quincy Cunningham, and Niko Wise.

Burial will be private. A Celebration of Life will be planned for later this year.

Any donations can be made to his cherished program: The IRT Phillips Academy, 180 Main St Andover, Ma 01810