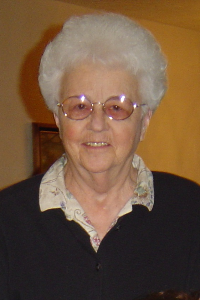 Betty Jo Johnson, 97, passed away on August 6, surrounded by her family. She was born at home, in the small town of Crawford, in “Western” Oklahoma to John and Daisy Hyman. She and her sister rode a horse to school throughout her elementary years and her mother was her school teacher. Betty Jo graduated from high school in 1941, attended Business College in Kansas and began work at Tinker Air Force Base in Oklahoma City. When her parents moved to Forest Grove, Oregon, Betty Jo followed them in 1944. She attended Pacific Bible College in Portland, Oregon and graduated in 1950.

On June 1, 1950 she married Donald D. Johnson. Betty Jo moved with her husband to Anderson, Indiana where she worked as the Director of Christian Education at Park Place Church of God. Betty Jo and Donald were commissioned as missionaries to British Guyana in 1955 and a year later to Trinidad-Tobago in the West Indies. The family, now including three children, moved to Atwater, California in 1961 where she took on the role of pastor’s wife and began her public school teaching career. In 1965, the family moved back to Anderson, Indiana where she completed a Master of Education at Ball State University, and taught kindergarten and 1st grade until her retirement at age 70.

Teaching was Betty Jo’s passion, specifically helping children learn to read. To this day, children remember “Mrs. Johnson, who traveled the world.” During her tenure at Park Place School, Betty Jo traveled with her husband around the world. The children followed her trip with a large wall map which bore the title: “Where in the World is Mrs. Johnson?”
Laurence Sterne, in his book, A Sentimental Journey, writes: “What a large volume of adventure may be grasped within this little span of life by [those] who interest [their] hearts in everything.” Betty Jo’s heart was big as was the adventure of her life.

A special thanks to the loving staff at Sugar Fork Memory Care in Anderson who cared for Betty Jo during the last two years of her life. Also, thanks to the hospice nurses, aids and music therapist from Paradigm who ministered to her during her final weeks.

Funeral services will be held at Park Place Church of God on Tuesday, August 10 at 11 a.m. Visitation will precede the service from 9-11 a.m. Burial will follow at East Maplewood Cemetery.

In lieu of flowers, memorial donations may be given to Park Place Church of God Endowment.