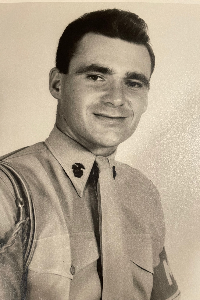 Joseph L. Berube, Jr., 86, of Douglas Avenue, North Providence, died Sunday, July 25, 2021 at HopeHealth Hospice in Providence. He was the husband of Irene F. (Garbecki) Berube. They had been married for 41 years.
Born in Woonsocket, he was the son of the late Joseph L. Berube, Sr. and the late Blanche (Carpentier) Berube. He had previously lived in Inverness, Florida where he worked as a Deputy Sheriff in Collier County before returning to Rhode Island and living in North Providence. He served in the U.S. Marine Corps from 1954 to 1957. He worked as a carpenter for Local #94 Providence before his retirement. He was a member of the American Legion and enjoyed spending time at the Salvatore Mancini Center, watching sports and traveling.
Besides his wife, he is survived by his children: Marc A. Berube of Montclair, NJ, Michael C. Berube and his wife, Karen of Spokane, WA, Lisa B. Felice and her husband, Stephen of Blackstone, MA, his grandchildren: Matthew Berube and his wife Brittan, Steven Berube and his wife Lisa, and his great grandchildren: Tristan, Fiona, Thomas, Greta and Hattie Berube, all of Spokane, WA. He is also survived by his step-children: Clinton Perry and his wife Colleen, of Coventry, RI and Kathleen Borowski and her husband Edward, of North Kingstown, RI, step-grandchildren Morgan, Mallory, Melissa and Maegan and step-great grandchildren Griffin and Harper.
A Mass of Christian Burial will be held on Thursday at 9:30am at Mary Mother of Mankind Church, 25 Fourth Avenue, North Providence. Burial with Military Honors will follow in RI Veteran’s Cemetery, Exeter. Visitation is respectfully omitted. In lieu of flowers, donations in his memory may be made to Special Olympics.