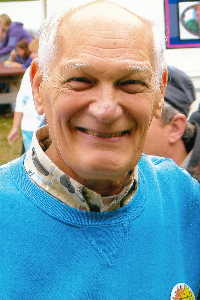 Richard Ayotte manned the printing presses and Betty was the smiling face behind the counter and pleasant voice on the telephone. Together Richard and Betty carried on a family legacy that spanned nearly a century. Ayotte Printers on Cass Ave. was more than just a print shop. For over nine decades it was a place where relationships were valued, business was done on a handshake and customers became friends. Richard Ayotte was the man who made it that way, and that was just how he wanted it!
Richard R. Ayotte, 80, of Woonsocket passed away Friday July 23, 2021 at Landmark Medical Center after along illness. He was the loving husband of the late Beatriz S. “Betty” (Barrera) Ayotte. They were married on May 10, 1980 and shared over 37 years together until her passing on June 11, 2017.
Born at the family home on Sweet Ave. in Woonsocket on August 27, 1940 Richard was the son of the late Wilfred and Diana (Barry) Ayotte. Richard was a proud lifelong resident of Woonsocket and a graduate of Mount Saint Charles Academy.
Richard was the owner and operator of Ayotte Printers at 480 Cass Ave., a business started by his father Wilfred in 1924. Betty faithfully worked alongside her husband as Richard carried on the family business until May of 2017 when he retired after nearly a century of serving the community. Ayotte Printers was a staunch supporter of the Woonsocket community including Autumnfest and many church and youth activities.
In addition to running the printing shop Richard was an active member and supporter of several organizations in the community. Richard was proud of his French-Canadian heritage and to that end was a member of the Club Richelieu, Club Aram Pothier, Club Marquette, Cercle Laurier and Le Club Par-X. He was also a member of the B.P.O.E. Lodge # 850 and the Lions Club.
Along with his wife Betty Richard enjoyed country dancing, visiting casinos and taking long walks together. Richard and Betty were also able to enjoy several trips both domestically and internationally despite their busy work schedule.
Richard will be remembered as a kind and friendly gentleman. An easy going fellow with a ready laugh and smile, Richard treasured his family, faith, friends and customers.
Richard is survived by his sister Jacqueline Garcia of Dunedin, Florida nephews Raymond Garcia and his wife Kathleen of Reading, MA, Paul Garcia and his wife Katherine of Tarpon Spring, Florida. He is also survived by his stepson Russell Kappelle and his wife Lynne of Hawaii, his brother- in-law and sister-in-law Roberto and Christine Barrera of North Smithfield and his loyal and faithful friend Frank Beauparlant of Woonsocket. Richard was the brother of the late Francis “Frank” Ayotte and step-father of the late Kenneth and Lloyd Kappelle.
His Mass of Christian Burial will be Friday July 30th at 10:00am in St. Joseph Church on Mendon Rd. in Woonsocket. Burial will be private.
In lieu of flowers memorial donations may be made to the Rose Ferron Foundation of Rhode Island 339 Arnold St. Woonsocket, RI 02895.
Arrangements are in care of the Menard-Lacouture Funeral Home, 127 Carrington Ave. Woonsocket.
www.menardfuneralhome.com