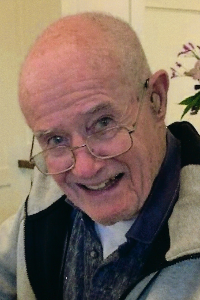 Richard F. Bracchi, 91, passed away July 22, 2021 Richard was a loving son, husband, father, grandfather, uncle and cousin. Formerly of Quincy, he resided in Stoughton from 1960 to 2012 and then moved to Norton. A graduate of Quincy High School in 1949, Richard was a Junior Red Cross Representative and participated in the Winter Sports Club. He worked for New England Telephone Company (now Verizon) for 35 years and was a member of the Telephone Pioneers of American. He retired in 1992. Richard was strong in his faith, attending Mass regularly. From an early age he was an Alter Boy and sang in the choir. Later he worked on the church Bingo fundraising committee, painted a backdrop to the outdoor Christmas manger, chaperoned the CYO, lead a Boy Scout troop, lead a daily rosary prayer group, and worked in the Canton Food Pantry. He strongly believed in sharing what he was given with others in the community. He was a communicant of St. Mary’s Church in Norton and St. Gerard’s in Canton. He was generous to all with helping anyone anyway he could. Richard enjoyed being outdoors. From landscaping, gardening, to dog walking, he was always on the go. He rarely seemed to not have some kind of new flower or tip on planting vegetables to share. He spent time taking his children sledding, ice skating, and skiing in the winter, never minding the long drives to get to some of the locations. He seemed to have endless energy. He enjoyed the local sports teams especially the Patriots and the Red Sox, enjoying live games from time to time with his family. He became interested in researching family history, read National Geographic magazine and any books with a historical nature. He was a talented oil painter who often gave his paintings as gifts to family and friends. He was a whiz at Jeopardy, playing along with the show and often answering the quiz with the correct answers amazing his family and friends. Richard was a loving husband of 57 years to his wife, Lucianne, until she predeceased him in 2014. A kind caring father to his two daughters, their husbands, and Nonno to his grandson, plus a favorite Uncle to countless nieces and nephews. His pride and joy was participating in anything his family asked him to attend. He never thought twice about attending their dance recitals, theater performances, art shows, sporting events or family events. Richard had a wonderful sense of humor and everyone knew he was up to something when he’d get that special twinkle in his eye that could turn to a sparkle if he was successful in his bit of fun. His smile sense of fun and laugh could light up a room. Richard is survived by his loving daughters, Karen Bracchi-Kelly, her husband David of Blackstone, MA and Maria Vierbickas, her husband Marc and grandson, Brett of Norton, MA and many nieces, nephews and cousins. Richard was pre-deceased by his parents, Elpedio and B. Maria of Quincy, MA, his wife Lucianne (Foley) Bracchi, his brother, Robert L. Bracchi, Sr., 14 of his wife’s siblings and their spouses, his first cousins, and 4 nephews.
Visiting hours at the Dockray & Thomas Funeral Home 455 Washington St. Canton Thursday 4-7pm. Funeral mass at St. Gerard Majella Church Canton Friday morning at 10. Burial Blue Hill Cemetery, Braintree.
In lieu of flowers donations may be made to the Alzheimers Foundation, alzfdn.org