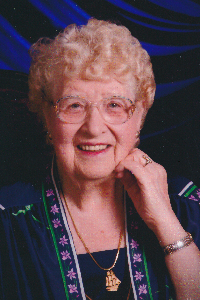 Whitman – Meredith L. (Peterson) Gould, 94 of Whitman, died Tuesday July 20 at the Baystate Wing Hospital, Palmer, MA. She was the wife of Robert J. Gould who predeceased her in 2001 and daughter of the late Esther and Carl F. Peterson, Sr.

Born in Brockton, she was a 1945 graduate of Whitman High School and lived most of her life in Whitman. When she was young, she studied voice with Minnie McCarthy of Whitman and the area’s leading contralto soloist, Elva Boydon. She was a soloist at the Porter Congregational Church in Brockton and the Central Baptist Church in Middleboro under the direction of Carl Block and was a soloist at many weddings and activities in the area.

She was secretary of the Dept. of Christian Education at the American Baptist Convention of Massachusetts (TABCOM), now headquartered in Dedham, MA. In that position she handled the camper registration for Grotonwood, the Baptist Christian Camp in Groton, MA. Meredith was also the Female Advisor to a group of 27 young people from around New England, who attended the Baptist World Youth Conference in Ber, Switzerland and toured Europe before returning home. Meredith’s daughter Melodie Hall, along with Donna Rhoades and Lynne Simmons attended as delegates for the First Baptist Church of Whitman. She was a member of the First Baptist Church of Whitman from 1959 until the church was disbanded and closed in 2009. She also was a Deaconess, chairperson of the Nominating Committee, sang in the choir, and in her younger years was one of the leaders for the high school young people.

She was one of the organizers of the Brockton Parents Without Partners (PWP) organization, and was also the founder of the Baystate Coin Shooters Club. Both Meredith and Bob were owners of the Coach Road Shoppe that sold metal detectors and were both avid metal detector buffs. Because of her environmental concerns, she believed in composting and used it freely on her beautiful gardens.

She will always be remembered for her smile, her love of music and her beautiful singing.

At the request of the family, if you are not fully vaccinated, and for the safety and health of everyone, please wear a mask.

Family and friends are invited to attend visiting hours to be held Saturday July 31 from 9:00-10:00AM followed by a funeral service at 10:00AM in the Blanchard Funeral Chapel, Plymouth Street (Rte. 58 @ the rotary) Whitman. Burial will follow in the Melrose Cemetery, Brockton.

In lieu of flowers please donate to an animal shelter of the charity of your choice.