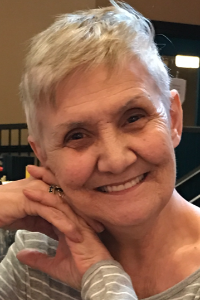 Barbara A. Walker, 75, of Indian Run Trail, passed away on Monday July 12 in the Friendly Nursing Home in Woonsocket.

Barbara was born in 1945, in Central Falls, she was the daughter of the late Modesto M. and Sara Grace (Harrison) George. She had lived in Smithfield for 6 years with her daughter and son-in-law for the last 2 years. She was raised and had lived most of her life in North Providence, then she fell in love with Maine and lived there for some time as well. She worked as a computer data operator, assistant social worker, and in retail before retiring.

Barbara was a devoted and loving mom. She enjoyed sewing and crafting, and a love of music and dancing. Her greatest gift was people, there was no one that Barbara would not say hi to and strike up a conversation. She had the beautiful gift of opening her heart to all. Anyone who knew her, knew what a kindhearted soul she was. She will be deeply missed by her family, friends and all who knew her.

Barbara is survived by her daughter Eliza Walker and her husband Christopher Campagnone of Smithfield, her sister Martha Scetta of North Smithfield her loving niece Melissa Pitocco, nephew Mark Scetta, great nieces and nephew, and her brother James George of Las Vegas.

Her funeral will be Saturday July 17th at 1:30pm in the Anderson-Winfield Funeral Home, Route 44 at Greenville Common, Greenville. Visitation to which relatives and friends are invited will be Saturday 11:30am to 1:30pm. In lieu of flowers donations in her memory may be made to the Alzheimer's Association Rhode Island Chapter, 245 Waterman St #306, Providence, RI 02906 Alzheimer's Association RI Chapter