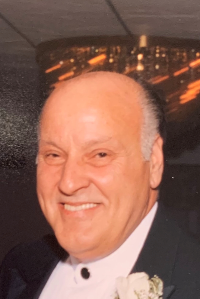 Paul Theodos, age 83, of Wilmington, passed away at his home Monday, June 21, 2021 surrounded by his loving family. Born in Boston, Paul was the proud son of Albanian immigrants Andrea and Vengelina (Cotto) Theodos.

Paul spent his youth in Boston's West End, Brookline and Jamaica Plain before settling in Wilmington. After graduating Brookline High School, he honorably served in the United States Army National Guard. Paul went on to become a Patrolman with the City of Boston Police Department. After his retirement from the police force, he became a Certified United States Marshal upon completing Federal Law Enforcement Training.

After leaving law enforcement, with his entrepreneurial spirit Paul invested in real estate and the stock market. Paul owned and operated the Four T's Fuel Stop in South Boston for many years and made several friendships with his customers. Fondly known as Oscar by family and friends.

In his leisure time, Paul enjoyed listening to his favorite music, especially Frank Sinatra and he loved to dance. He was known as an excellent pool player and spent many hours practicing his skills on the billiards table either at home or at a local pool hall. He was a loyal Patriots football fan and enjoyed watching boxing matches on television. Paul was an animal lover who enjoyed the companionship of his many dogs over the years.

In addition to his late parents, Paul is predeceased by his beloved and dear aunt, (Tete) Nerenxha Spiro. Paul is survived by his children; Sean Theodos and his wife Jennifer of Wilmington, Pauline Cullen and her husband Brian of Wilmington, Roxanne Pratt of Myrtle Beach. SC, and Edward Theodos and his wife Tracy of Lowell. He is also survived by many loving grandchildren, nieces and a nephew. Brother of Louis Theodos of Dover, MA, and the late William Theodos and Christie Theodos.

Family and friends are respectfully invited to attend calling hours at the McLaughlin - Dello Russo Family Funeral Home, 60 Pleasant Street, Woburn, Tuesday, June 29th from 4 to 8 p.m. Interment services will be private. It has been requested that in lieu of flowers contributions may be made in Paul's memory to the American Diabetes Association P.O. Box 7023, Merrifield, VA 22116-7023.