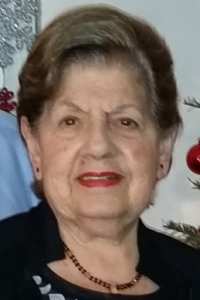 Born in Damascus Syria in 1928 and was the third daughter of the Moukhtar Adour Kevorkian and his wife Mary Yakoubian.

She immigrated to this country with her youngest sister Hripsimeh Under the war brides act Her cousin needed to enlist the help of Congressman John F. Kennedy to break through the bribery attempt Officials in Damascus.

After entering this country Ann chose from the suitors knocking on her cousin's door her husband Charles Kalajian. They established their home in Watertown and had 3 boys the family then moved to Belmont she was able to help her other sisters and their families to enter this country and get established .And found work at Beaver surgical supplies where she quickly advanced developing her skills and mechanics as well as social skills to become supervisor, she also was able to get positions for Her two other sisters.

After her husband retired Anne chose also to retire and live happily in thier renovated home in Manomet where family reunions and happy memories were built through all the years and where she created their garden paradise.