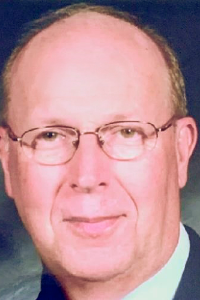 NORTH PORT, FL – Peter P. Gazda, 68, of North Port, Florida and a former resident of Chicopee, passed away on Thursday, June 18, 2020. He was born in Holyoke on March 12, 1952, a son of the late Paul and Helen (Bolko) Gazda. He graduated in 1970 from South Hadley High School and went on to play football as a defensive tackle for the AIC Yellow Jackets and graduated in 1975. Peter had a long and successful career, first working for Atlas Copco and then as an account manager in the transportation industry. He most recently worked for A. Duie Pyle for 17 years and retired in 2018. Peter was an avid sports fan. He loved football, watching the Boston Red Sox, and especially loved to play golf. Peter leaves his loving wife and best friend of 44 years, Susan J. (Krajnak) Gazda, his two loving daughters, Tracy Krynick and her husband, Greg, of Marlborough, CT and Stephanie Gazda and her partner, Jack Butler, of Winthrop; his cherished granddaughter whom he dearly adored, Addison Krynick; his brother, Michael Gazda and his wife, Diane, of Punta Gorda, Florida; his two sisters-in-law, Elizabeth Gazda of West Springfield and Bernadette (Krajnak) Fernandes of South Hadley; his stepbrothers, Rudolph Kuc and his wife, Patricia, of South Hadley and John Kuc and his wife, Diane, of Ludlow; his stepsister, Alice Partanen and her husband, William, of Florida; his stepsister-in-law, Patricia Kuc of Chicopee; and his many dear nephews, nieces, cousins, numerous friends and extended family and friends. Besides his parents, Peter was predeceased by his stepmother, Sophie (Kuc) Gazda; his brother, Paul Gazda, his stepbrother, William Kuc; his father-in-law and mother-in-law, Joseph and Anna Krajnak; his three brothers-in-law, Joseph Krajnak, John Griffin and Ceasar Fernandes; and his sister-in-law, Ann (Krajnak) Griffin. His relatives and friends are invited to attend a Mass of Christian Burial on Saturday, June 19, 2021 at 10 a.m. at Saint Anne Church, 30 College Street, Chicopee, MA 01020. His burial will follow the Mass at Mater Dolorosa Cemetery, 152 Pittroff Avenue, South Hadley, MA 01075. There are no visiting hours at the St. Pierre – Phaneuf Fairview Chapels, (413-533-3307), 506 Britton Street, Chicopee, MA 01020. His family requests that in lieu of flowers, memorial donations may be made in his name to the Dana Farber Cancer Institute/The Jimmy Fund, 10 Brookline Place West, 6th Floor, Brookline, MA 02445-7226 or the American Cancer Society, 30 Speen Street, Framingham, MA 01701. For more details and to leave his family condolence messages, please visit:
www.stpierrephaneuf.com