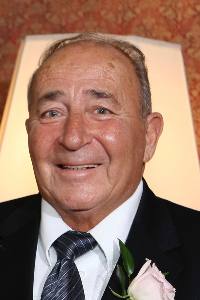 Joseph E. Teneriello Jr., 81, of Dracut, passed away peacefully at his home surrounded by his loving family. The son of the late Joseph and Phylis (Scacci) Teneriello he was born in Malden on September 28, 1939. Mr. Teneriello moved to Dracut in 1972 with his family. He proudly served in the United States Coast Guard. Mr. Teneriello was the founder of T & T Anodizing Inc. an aerospace metal finishing company located in Lowell MA. T&T was founded in 1978 and is now owned and operated by his son Joseph III and his two sons Michael and Joseph IV. He enjoyed gambling, playing video games with his grandchildren, cookouts by the pool with his family and friends and making Sunday gravy. Mr. Teneriello was pre-deceased by his parents and two brothers Ralph “Chickie” Teneriello and Robert Teneriello. He is survived by his loving wife of 61 years Corene D. (Croce) Teneriello of Dracut, one daughter: Carol Teneriello and her fiancé William Neverett of Nashua, NH, three sons: Joseph Teneriello III and his wife Nancy of Stoneham, Thomas Teneriello and his wife Lisa of Hudson, NH, Michael Teneriello and his wife Kelly of Clermont, FL. One sister: Christine Teneriello of Malden, one brother: Peter Teneriello of Fort Lauderdale, FL. Grampa, also known as Papa Joe, will also be missed by his 11 grandchildren, 13 Great-grandchildren, and several nieces and nephews.
Family and friends are invited to attend visiting hours on Wednesday, May 19, 2021 from 10:00 am to 12:00 pm at Edgar J. Racicot Inc. Funeral Home, 1400 Broadway Rd., Dracut. A funeral service will be held at 12:00 pm at Racicot Funeral Home, burial will follow in Puritan Lawn Memorial Park in Peabody. Online condolences may be shared at www.racicotfuneralhome.com