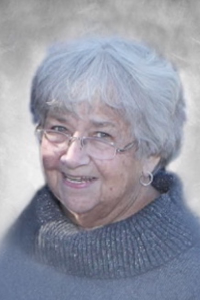 Dorothy A. "Doey" (Feeley) Nasuti 82, of Franklin, passed away, peacefully, with her family at her side Sunday May 9, 2021 at the UMASS Memorial Medical Center University Campus, following a brief illness. She was the beloved wife of the late Harvard P. "Harvey" Nasuti, who died in 2017.

Born August 11, 1938, in Franklin, a daughter of the late John C. Feeley, Sr. and Helen M. (Ferguson) Feeley, she was a former resident of Norfolk.

She was raised and educated in Franklin, and was a graduate of Franklin High School Class of 1956. Doey worked as a telephone operator for New England Telephone and was a seamstress, having worked for Loretta’s Decorating as well as sewing singlet’s for Carmine Colace’s wrestling teams & Franklin Youth Hockey Associations nameplates on jerseys.

Dorothy was devoted to her family and was loved by anyone she met. If you met Doey, you instantly became her friend. Along with her late husband, they had traveled to Aruba for over 30 years, and every summer at the Cape in Dennisport, where they were always the life of the party. She enjoyed and was known for being a great cook, her “Friday Night Girls Night’s”, going to the casinos and watching her grandchildren’s events.

She was a member of St. Mary’s Church Franklin, where she was a former president of the Catholic Woman’s Club.

She is survived by her children, Christine L. MaGuire and her husband Kenneth of Franklin and Thomas P. Nasuti and his wife Janet of Franklin, her siblings, John C. Feeley, Jr. of Franklin, Thomas Feeley & Dennis Feeley both of North Kingstown, RI, Mary Ryan of Wrentham and Noreen McConville of Grafton.

She was the sister of the late Denise and Lynne Feeley.

Also surviving are the 3 loves of her life, her grandchildren, Noah, Tia and Jack.

Relatives and friends are invited to attend her funeral Saturday May 15th, at 9AM from the Charles F. Oteri and Son Franklin Funeral Home 33 Cottage St. followed by a funeral Mass in St. Mary's Church, Franklin at 10AM. To view the Mass click stmarysfranklin.org

Calling hours are Friday from 4-8PM.

In lieu of flowers, donations in her memory may be sent to the Friends of Franklin 50 Corbin St. Franklin, MA 02038.