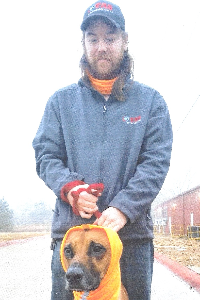 Andrew P. Donndelinger, age 33, of Texarkana, Arkansas, formerly of Norton, passed away on Thursday, April 15, 2021. He was the beloved longtime companion of Felicia Connolly.

Born in Stoughton, MA on March 24, 1988, he was a loving son of Paul A. Donndelinger and his wife Kathleen of North Attleboro and Janice M. (Warnock) Smith and her husband John of Norton.

A resident of Arkansas for the past three years, Andrew grew up in Norton and was a 2006 graduate of Norton High School. He had worked as a service technician in Texas for TAS Environmental and had previously been employed at The Cooley Group in Pawtucket, RI, 24 Hour Trauma in Easton and at the Produce Barn in Norton.

Andrew’s family, friends and dog “Chewy” were the essence of his life. He enjoyed playing guitar, gaming, playing his favorite video game Zelda and hiking and camping on the island.

In addition to his parents and companion, he was the dear brother of Jayme Donndelinger and her fiancé Benjamin Whalen of Attleboro, Jill Donovan and her husband Shawn of Mapleville, Rhode Island, Linsey Smith of Bridgewater, Christopher Wunschel of Woonsocket, Rhode Island, Kevin Wunschel and his wife Emily of Attleboro and the late Joshua Smith. He was the loving grandson of Elizabeth Warnock of Stoughton, the late Robert Warnock and the late Vincent and Nancy Donndelinger. He was the cherished uncle of Mackenzie, Shawn Michael and Kaitlyn Donovan.

Relatives and friends are cordially invited to attend visitation on Saturday, May 8th from 9:00-10:30 A.M. at the Norton Memorial Funeral Home, 19 Clapp Street (Off Route 140, Taunton Avenue) Norton.

A Funeral Mass will be celebrated at the conclusion of visitation on Saturday at 11:00 A.M. in Saint Mary’s Church, 1 Power Street in Norton. Burial will follow at the Newland Cemetery in Norton.

In lieu of flowers, Andrews family has requested that donations in his memory be made to the Animal Welfare Institute. www.awionline.org