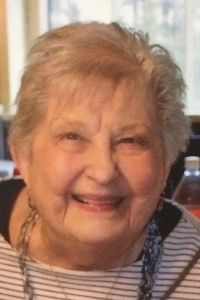 SACO- Louise Nork Stuart, 86, of Saco, Maine, died peacefully on May 3, 2021. She was a woman of great faith that carried her through her life and especially through her final weeks. She passed from this world to the next with amazing grace and dignity and never lost her sense of humor, which was evident even in the late stages of her illness.

Born in Nanticoke, Pennsylvania, on September 2, 1934, Louise was the daughter of the late John F. Nork and Jane E. Weirdak Nork. She was a graduate of St. Mary’s Parochial School, Nanticoke, Pennsylvania, St. Ann’s Academy, Wilkes Barre, Pennsylvania and Wyoming Seminary School of Music, Kingston, Pennsylvania, where she honed her skills as a trained soprano vocalist. Louise was employed by Catholic Charities of Nanticoke, The Leukemia Society of America for 20 years in Hartford, Connecticut, and Providence, Rhode Island, where she was Executive Director of the Rhode Island Chapter, and later in life at Traveler’s Insurance of Nanticoke. She moved to Maine in the summer of 2012 and took every opportunity to go to the ocean at Pine Point and enjoy more time with her family.

She was very active in The Little Theater of Wilkes-Barre; Connecticut, Rhode Island and Pennsylvania Chorales and various church choirs. She volunteered with the Red Cross, Meals on Wheels and many other charitable organizations. Louise enjoyed watching her favorite baseball team, the Boston Red Sox. Those of us in her family will miss our yearly phone call from her singing “Happy Birthday”. She made each of us feel special.

Louise was married to Richard (Struzewski) Stuart of Nanticoke. She is survived by her daughter Karen Behles and husband, Joe of Evanston, Illinois, son David Stuart and wife Beth of Standish, Maine, and her beloved grandchildren; Mara Behles-Dean and husband Jesse of Salt Lake City, Utah, Rita Behles of Salt Lake City, Utah, Max Behles of Vancouver, British Columbia; Dylan Stuart of Limington, Maine, and Shannon Stuart of Boston, Massachusetts. Louise was predeceased by her daughter Annette Stuart Spano of Nanticoke. She is also survived by her brother, John A. Nork and wife Mary of Higganum, Connecticut, and sister Marie Williamson of Exeter, Pennsylvania. She was predeceased by her brother, Anthony J. Nork, Nanticoke, and baby brother Marion Narkiewicz, Nanticoke. Louise also leaves behind many nieces, nephews and a large extended family that love her very much.

The family would like to thank Dr. Anna Niegowska and Brandy McKenney, PA; Hospice of Southern Maine, her many friends and caring neighbors at Cascade Brook in Saco, Maine, and Natalie Ross for her much needed help and companionship in caring for Louise those final days.

A memorial service will be held at a later date.

In lieu of donations or flowers, please do something nice for someone else to pass on the love and compassion Louise had for anyone she met.