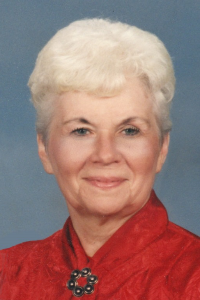 Rosemary Blake Williams, 87, passed away on September 15th, 2020, at her residence in Muncie, Indiana. (Services were postponed due to concerns raised by the COVID-19 pandemic.)

Rosemary was born on March 26th, 1933, to Joe and Ruth (Jackson) Blake. The second of their six children, she was raised on her parent's farm in northern Madison County, Indiana, where her family was prominently featured in the booklet Small Town USA. She attended Cunningham Elementary School and Alexandria High School, where she finished second in the regional Latin contest and was a finalist in the State competition held in Bloomington.
Throughout her life, Rosemary was a devout Christian. Arising from her early roots in the First Church of God in Alexandria, she was a lifelong member of the Church of God. After marrying Church of God pastor Jim Williams in 1952, she spent the next 60 years as a minister’s wife, especially enjoying her 15 years as a pastor’s wife.

When her children were young, Rosemary was a stay-at-home mother, but when their maturity allowed, she accepted a position at Warner Press, where she was the administrative assistant to the editor of Vital Christianity. She studied the Bible daily, and she also enjoyed sewing, reading, camping, and cooking big dinners for her family, often followed by rousing games of Skip-Bo. With her keen sense of style, she was a snappy dresser.

A memorial service honoring Rosemary’s life will be held at 2:00 pm on Monday, May 3, at Park Place Church of God in Anderson, Indiana. The service will be preceded by an hour for visitation from 1:00 to 2:00 pm.

Rosemary will be remembered as a loving and devoted daughter and step-daughter, sister, wife, mother, grandmother, great-grandmother, and friend. Her family and friends will greatly miss her.