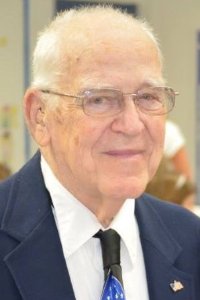 Robert Titterington Sr., 93 of Whitman, MA, passed away on April 6, 2021 surrounded by family.

Robert served in the U.S. Navy as a corpsman in the medical unit during World War II and was honorably discharged in 1946.

He worked many years as a foreman for Claf Box in Brockton, MA and later retired from Shaw’s Warehouse in East Bridgewater, MA.

Not one to sit still, after retiring he got a job driving the Council of Aging bus for the town of Whitman which included many trips to Foxwoods that he enjoyed the most. He also served as a board member for the COA.

Robert was a member of the First Congregational Church of Whitman for over 50 years, serving at one time as a Deacon.

He was a proud member of the Puritan Lodge at the Tri Town Temple, for 60 years and served as Worshipful Master in 1979. Also, a member of the Commandry at Baalis Sanford Lodge in Brockton, MA, 32nd degree Scottish Rite and at one time a member of N.C.T. National Camping Travelers.

Robert enjoyed driving to Millie’s Restaurant in Whitman for his blueberry pancakes and spend time with his friends and brother Masons. When he was no longer able to drive the car, he would take his scooter with the orange flag attached to the bumper and head on down to Millie’s.

Known affectionately as “Mr.T” or “The Mayor” he was well known and loved by many in the community.

Robert was preceded in death by his wife Phyllis of 50 years. They both spent many years travelling, going on cruises and enjoyed camping.

Survived by his son Robert (MaryAnn) Titterington, Jr. and daughters Lisa (Matthew) DellaBarba of Whitman, Kathy Evans of Halifax, Nancy (George) Gonsalves of Carver and Christine Brewer of Halifax. Also, his many grandchildren and great grandchildren that he loved dearly.

Visiting hours will be held Saturday April 10 from 2:00-4:00 PM in the Blanchard Funeral Chapel, Plymouth Street (Rte. 58 @ the rotary) Whitman. A Masonic service will follow at 4:00 PM.