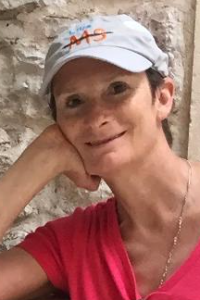 Tracy Jane Hawkins passed away peacefully at home in Somerville on Monday, March 29th at age 55 with her partner by her side and beloved fur babies nearby. Tracy was diagnosed with ovarian cancer almost 10 years ago, which became recurrent about 8.5 years ago with continuous lines of treatment thereafter until recent progression and complications sent her into hospice care ~three weeks ago. The strength and determination she demonstrated every day of this very private battle were awe inspiring, allowing her to far exceed typical survival expectations, all under the care of the team of doctors and other care givers at Dana Farber. And she did it all with incredible courage, grace and kindness, core to her being and beloved by all who had the privilege of knowing her. She did not want to be defined by her illness and sought any sense of normalcy whenever possible, taking joy in the smallest of things….sun on her face, the smell of the sea, a good cup of coffee, snuggling the fur babies.

Born in High Wycombe, United Kingdom as an only child to Frank and Margaret Hawkins, both of whom passed away far too young (Tracy was only 15 and 35 respectively), Tracy lived in the London area until life brought her to the US about 20 years ago, initially in San Francisco and the last 10 in the Boston area. In 2013, Tracy became a US Citizen in Boston's Faneuil Hall, an auspicious occasion on hallowed ground. In 2012, she met the love of her life, Kristine Schroeder, in one of those fabled love at first sight stories and together they raised and loved a menagerie of cats and dogs, following a real estate and design bug through several moves around Boston proper and ultimately to Somerville's Davis Square area. Tracy lead an accomplished career in financial law and was recognized to be subject matter expert on a number of relevant topics in asset management regulatory and compliance, even leading her to testify in front of Congress during the financial crisis.

Tracy had one of the most interesting lives, beginning with her unique upbringing in the UK. Her parents gave her the option to choose between schools at age 7, and Tracy chose the Montessori-like school with the zoo and hippy headmaster to help shape her into the beautiful human being she became. Her independence was innate from childhood. She was known to take off in her "wellies" on an adventure with a childhood friend studying the wonders of the world. She kept a stamp collection, was a member of the young ornithologist's club, played chess, dabbled with photography (old school), also had a metal detector to find buried treasure, and was also proud card carrying member of the "Tufty Club" frequently calling herself a Safety Squirrel to patrol potential hazards to us and our pets later in life. Tracy had some of the funniest stories one could ever hear, and when delivered with her beautiful British accent and unique style, could have you rolling on the floor. Tracy enjoyed dancing and the London club scene and a love of travel took her to many exotic destinations around the world, but what brought joy to her heart in later years was being surrounded by love and fur babies, being near the restorative power of the ocean and a new real estate or home interior project. As a bit of a gypsy, many of those projects landed us in boxes.

Despite Tracy's professional success, her only true currency was kindness, compassion, laughter and light. She could be having the worst day, feel awful, and still smile and carry on a very engaged and caring conversation with those around her. Part of that was the British heritage, but mostly it was the down to earth, kind, compassionate, beautiful spirit. She loved music and saw many of "the greats", was a steadfast champion for justice, particularly for all animals, large and small. She would not let her partner kill spiders, despite her crippling fear and would escort them safely out. She was also quite determined and competitive, with athletics playing a substantial role over her life, early on as an accomplished tennis player, would swim a mile a day through college and run 10 miles a day for years in her ~30's. Once she set her mind to something, she'd set her jaw and not surrender. She did a hard core workout class with her partner a number of years ago where the finale was performing a plank until failure. Despite being a fitness junky a good part of her life , she wasn't in particularly good shape at this point, in a class full of people who were, but she set her jaw and after 7.5 minutes locked in a plank, she was the last person "standing". She was sore for about a week after, but wholly satisfied by the accomplishment.

Tracy's kind eyes and infectious smile were windows to her soul. A spiritual person, her rare combination of inner strength, determination, kindness, compassion, and warmth were the cornerstones of the imprint she made wherever she went. Those who knew her well got to see her delightful quirkiness, incredible intellect and freakishly good sense of rhythm.

In true Tracy fashion, she did not want a memorial service, but was open to some kind of party. We will circle back on this in the future to celebrate her life, given sufficient time and space….and pandemic-related dynamics. There are so many stories and memories to share. Tracy has touched many people on various continents, so an online memorial will be created for her, allowing loved ones to share memories and kind pictures about what Tracy meant to them and how different she was…..funny moments and things that made Tracy, Tracy.

Tracy will be missed by all who knew her, because to know her was to love her. A brilliant light transitioned from Earth to the Universe that day, but I am told her spirit is at peace and continues on. True love always, my British warrior. Our bond is forever. Rest in peace.

In lieu of flowers, please consider memorializing your support to one of Tracy's favorite causes:
Dana Farber - An incredible organization of people doing God's work every day. I have set up a memorial page to accept donations for her here

St. Jude's Children's hospital - There is no rhyme or reason to who gets cancer, but especially egregious is the tragedy of childhood cancer. Such a worthy cause, click here.