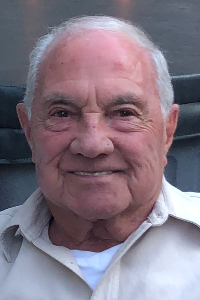 Fred L. Drew, of Epping, NH and a former longtime resident of Medford, passed away peacefully, March 18, 2021. He was 84 years of age. Fred is the beloved husband of Margaret M. "Peg" (DeVeer) Drew, and together they shared nearly 63 years of marriage. Fred was born in Boston and was the son of the late Albert and Margaret (McFadden) Drew, Sr.


Fred was raised and educated in the Jamaica Plain section of Boston where he attended the Mary E. Curley Elementary School and went on to graduate from the Boston Trade High School for Boys. Fred later served for a brief period in the United States Air Force during the Vietnam era. When he returned home from the service he began his career working as a civil engineer for nearly thirty years at the Cambridge Court House prior to his retirement.


Fred was a man with a strong Catholic faith. He was a third degree member of the Knights of Columbus, Pere Marquette Council 271 in South Boston. He enjoyed participated in many of their events and looked forward for many years to their annual retreat. Fred loved camping and spent many years at the Grandview Campground in Rochester, NH with his family. He was also passionate about golf and was a member of the Farmington Country Club in New Hampshire where he loved to play and made many wonderful friendships. Fred's greatest joy was his family and nothing gave him more joy than to be together with them and especially his grandchildren who he adored. He will be greatly missed.


In addition to his beloved wife, Fred is survived by his devoted children; Wayne P. Drew and his wife Cheryl of Medford, Christina "Tina" Cirillo and her husband Michael of Hudson. He is the loving grandfather of Kyle Drew, Samantha and Madison Cirillo. Brother of Pauline O'Donovan of West Yarmouth, Jean Mangone of Somerville, Beverly Hooley of Quincy the late Ora Gear and Albert Drew.


Funeral services will be held from the Dello Russo Family Funeral Home, 306 Main St., MEDFORD, Saturday, March 27th, at 9 a.m. followed by a funeral Mass celebrated in St. Clement Church, 71 Warner St., Medford, at 10 a.m. Relatives and friends are respectfully invited to attend. Visiting hours Friday from 4 to 8 p.m. Services will conclude with burial at Oak Grove Cemetery, Medford. All attending must wear face masks and adhere to social distancing protocols. As an expression of sympathy contributions may be made in Fred's memory to the St. Jude Children's Research Hospital, Memorials Processing, 501 St. Jude Place, Memphis, TN 38105-9959.