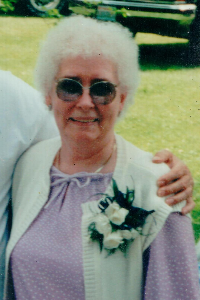 Geraldine Clara Rayburn, age 91 of Grandview, entered into rest on February 12, 2021 at Richland Rehabilitation Center in Richland. She was born in White Swan, Washington on January 25, 1930 to John and Augusta Palmer. She was raised and educated in Harrah. Geraldine and John Rayburn were married in Yakima on May 12, 1950 and made their home in Wapato until settling in Grandview in 1961.
Geraldine was a devoted wife, mother and grandmother. She and her husband, John, a Yakima County Sheriff also took at risk children into their home and cared for them as if they were their own. She enjoyed being a homemaker and caring for her family and flower gardening. She and her husband also enjoyed trips to Missouri to visit family.
Geraldine is survived by her daughters, Kathy Schab of Prosser and Christine Seyler (Scott) of Olympia, WA; son, Clayton Rayburn (Rhonda) of Grandview; numerous grandchildren, great-grandchildren, great-great-grandchildren, nieces and nephews ; and brother, John Maynard Palmer of Wapato. She was preceded in death by her husband John in 2004; her grandson, Robert John Graff in 2012; and her son-in-law John Schab in 2019.
A special thank you to the staff of Richland Rehabilitation Center who cared for our Mama.
Graveside Services will be held at 12:00 Noon on February 27, 2021 at West Hills Memorial Park in Yakima. You may leave a message for the family at www.prosserfuneralhome.com