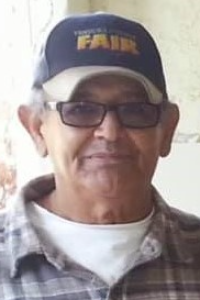 Frank J. Valenzuela “Frankie”, 72 of Ventura, CA, entered Heaven’s Gates on February 19, 2021. He was born in Ventura, CA, September 13 th , 1948 to Amelia and Frank Valenzuela who gave him the name “Sonny Boy”. He graduated from Ventura High School. Went on to serve in the United States Army from April 9, 1968 to April 8, 1974. During his time of service in the United States Army he received a National Defense Service Medal. He then went on to work for the Ventura Fair Grounds for 44 years. He started in 1976 and retired in 2010, however loved the Ventura Fair so much he continued to work each year after until 2019.

He was a beloved son, father, grandpa, great grandpa & brother.

Frankie loved driving the tractor to level out the ground for the Ventura Fair. He would often brag that he was the best one for the job. He knew exactly how to maneuver the tractor and exactly how long it would take to do the job. Frankie had a big heart and always had a smile on his face. His smile and presence would light up a room. Frankie’s gift was unique in that those who met him, even briefly were changed for life. His passion was creating memories with his grandchildren and great grandchildren. In fact, he would let his great grandchildren be mean teachers and he would be the student that often got in trouble. He loved food, well let us just say every type of food. Frankie especially loved Virginia’s homemade cooking. Frankie will be remembered for blasting his oldies music while driving, for being a jokester, giving kids money and always bringing donuts from Foster’s Donuts and for always helping those in need. All those special relationships he had, the one most important was his relationship with God which allowed him to be the special dad and grandpa he was.