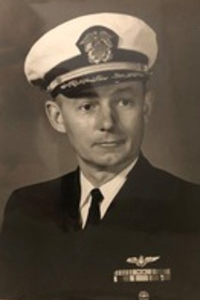 
S. Dartmouth - Robert Glenn Walker passed away peacefully at his home in South Dartmouth on Friday, February 19, 2021. Born on February 5, 1924, he was the only son of Frank A. and Maud O'Neil Walker of New Bedford.

Robert G. Walker entered Brown University in 1941 and joined the Navy ROTC. In 1944, he was commissioned as an Ensign USNR and deployed to the Pacific Theater. Following World War II, he returned to Brown University to complete his Bachelor of Science degree in engineering. In September 1946, he drove to Boston to request a transfer to the Regular Navy from the Reserves, which was approved along with a request to delay orders until graduation in 1947. Throughout his career he served at sea, commanding three ships, and on shore, working on the staffs of the Chief of Naval Operations and the Joint Chiefs of Staff in the Pentagon. He retired in October 1968 as a Captain USN, returning to South Dartmouth to begin a long and successful business career.

Robert G. Walker is survived by his wife of 71 years, Jane Evans Walker, as he was fond of saying, "the quintessential Navy wife;" his daughters, Deborah Walker and her husband Christopher Rodger, Elizabeth Walker, Patricia Walker King and her husband Paul King, and Jenny Walker; nine grandsons and four great-grandchildren. He was preceded in death by his son Captain Frank Evans Walker USAF.

A celebration of life is planned when warm weather arrives and COVID has abated. Donations in his honor can be made to the Old Dartmouth Historical Society — New Bedford Whaling Museum, 18 Johnny Cake Hill, New Bedford, MA 02740-6389; contact Traci Calabrese at tcalabrese@whalingmuseum.org or 508-997-0046, ext. 156