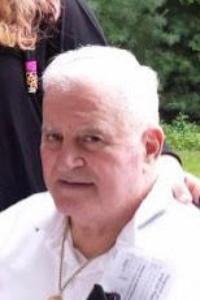 Brian "The Moose" McNeil, a lifelong resident of Charlestown, entered into eternal life on Sunday, February 21, 2021 at Massachusetts General Hospital in Boston. He was 81 years of age.

Brian was born in Boston on March 7, 1939, a son of the late James A. McNeil and Mildred E. (Austin) McNeil. He grew up in Charlestown where he was educated in the Boston Public School system and graduated from Charlestown High School. He furthered his education and received his Bachelors Degree from Boston University. While growing up in Charlestown, Brian played for the Charlestown Townies Football Team. Brian worked for the Department of Public Works for the City of Boston and retired as a Foreman following 30 years of dedicated service to the City of Boston. Following his retirement, he drove for the Charlestown Boys & Girls Club for 13 years. He enjoyed the yearly trip with the guys from the Knights of Columbus to Myrtle Beach, South Carolina and also his daily visits to Dunkin Donuts in Charlestown. He was a member of the Halligan Club in Charlestown and the Bunker Hill Council # 62, Knights of Columbus. Brian took great pride in his family and enjoyed all the special moments he was able to spend with each one of them.

Brian is the beloved husband of the late Patricia A. (Libby) McNeil. He is the devoted father of Briana McNeil, Gary McNeil, Sharleen McNeil, Kaileigh McNeil and the late Douglas McNeil and Billy McNeil. He is the loving Papa to Greg, Nicole, Douglas, Jack, John, Quinlan, Aidan, Alanna, the late James and his great-grandchildren Ryan, Rory and Grayson. He is the beloved brother of Sharon Fitzgerald and her late husband Thomas and the late Boston Firefighter James "Crash" McNeil and his late wife Joanne. He is also survived by his many loving nieces and nephews.

Relatives and friends are invited to attend Brian's Funeral on Monday, March 1, 2021 at 9 A.M. from The Carr Funeral Home, 220 Bunker Hill St. Charlestown followed by his Funeral Mass in St. Mary's Church, 55 Warren St. Charlestown at 10 A.M. His burial will be at Holy Cross Cemetery in Malden. His visiting hours will be on Sunday, February 28, 2021 from 2 to 5 P.M. in the funeral home. (FACIAL COVERINGS REQUIRED INSIDE CHURCH AND FUNERAL HOME.)