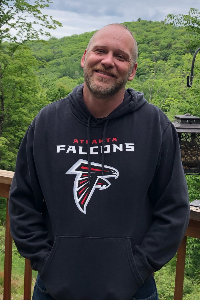 BRISTOL--- Conor Allen Ketchum, 41, of North Main Street, passed away at his home on Thursday, February 18, 2021, surrounded by his family and dogs after a year-long battle with Melanoma.

Conor was born in Concord, NH, on June 4, 1979, the son of Allen Ketchum and Suzanne (Stevens) Crowell.

He graduated from Laconia High School in 1998 and then from Universal Technical Institute Arizona in 1999. He then worked as an HVAC propane and oil technician for 23 years in the Lakes Region area, and finally found his home at Irving Energy for the past 8 years.

Conor loved many things in life, first and foremost were his dogs. When he wasn’t spending time with them, he also enjoyed riding his motorcycle, Star Wars, horror flicks, camping, fishing, target shooting, playing golf and hockey, the Boston Bruins, and his beloved Atlanta Falcons. In the summer months Conor enjoyed spending time with his family at their beach on Loon Pond with the Fourth of July fireworks display with his brother Ross being the highlight of his summer. In his younger years his love of live concerts and heavy metal had him following his favorite band Pantera up and down the East Coast. Among other things, he enjoyed working at the Salisbury Woods Haunted Barn every October where he volunteered as an actor and loved to scare the children and adults!

Conor is survived by his loving wife Heidi (Renkert) Ketchum of Bristol, his step- daughters, Paige, Quinn and Reece all of Bristol, his father Allen Ketchum, his mother and step-father Suzanne and Bob Crowell, his brother Ross Ketchum and his wife Caitlin of Concord, his three nieces Bailey, Elexa, Lily and three nephews Carter, Jacoby and Landin. He was predeceased by his maternal grandparents Richard and Nancy Stevens and his paternal grandparents Robert and Marie P. Ketchum.

Due to COVID-19 there will be no services at this time. A Celebration of Life will be held at a later date.