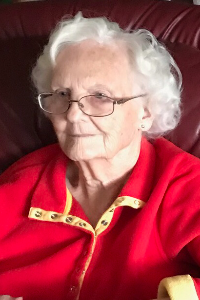 Born June 4, 1927 in Enigma, Mrs. McMillan was the daughter of the late D. W. Ray and Maybelle Cravey Ray. She was also preceded in death by her husband, James Leonard “J. L.” McMillan, Jr.; one brother and six sisters. In her earlier career, she worked as a telephone operator and then at the ABAC Bookstore. She also helped her husband on the family farm. She attended Turner Primitive Baptist Church in Enigma.

Mrs. McMillan is survived by three sons and daughters-in-law, Ted and Brenda McMillan of Americus, Mike and Stephanie McMillan of Forsyth and Kip and Lisa McMillan of Eatonton; one daughter and son-in-law, Rita and Jerry Hall of Enigma; one sister, Jean Signorello of Orange City, Florida; eight grandchildren; and sixteen great-grandchildren.

Flowers will be accepted or memorial gifts may be made to Turner Primitive Baptist Church, c/o Tony Jackson, 323 Chula-Brookfield Road, Chula, GA 31733.