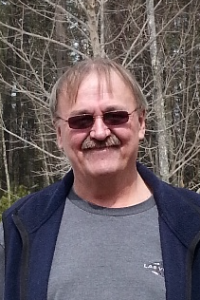 BUXTON- Bruce A. Graham, age 63, passed away February 19, 2021 at Gosnell Memorial Hospice House after a courageous battle with cancer.
Bruce was born in Houlton on January 20, 1958. He was youngest child of the late Thomas A. and Donna (Marshall) Graham. He grew up in Smyrna, Maine attending the area schools and moved to the Portland area in his late teens.
He was an avid fisherman as a boy, and usually could be found in the company of his cousin Rick Crowe on those fishing excursions. He also enjoyed playing pool and darts and was on leagues for several of his adult years. He started vegetable gardening when he bought his home and tried his hand at canning the results.
Bruce worked in the scrap metal business in several capacities the last was loading metal on barges on the Portland waterfront. He worked at WW Grainger in Portland for over 30 years before health issued required him to retire.
Bruce was predeceased by both parents and 3 of his brothers, Thomas, James, and Gary. He is survived by 3 sisters Jackie and husband Roy Catullo of Pottersville, MO, Ginny and husband Russ Coron of Morgantown, WV, Dora and husband Dale Smith of Standish, ME, and 2 brothers, John Graham of Smyrna, ME and Ted Graham of Doniphan, MO, several nieces and nephews along with several cousins.
Bruce requested there be no formal funeral service. He will be cremated and his ashes will be scattered at Smyrna at his request. This will take place after “Mud” season in Maine, late May or early June.
Online condolence messages can be submitted at the Chad E. Poitras Cremation and Funeral Service website, www.mainefuneral.com.
In lieu of flowers donations can be made to The American Cancer Society or Hospice of Southern Maine.