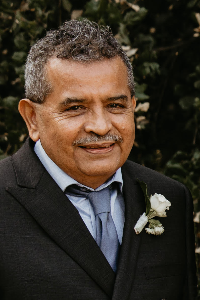 Arturo was born on June 02, 1952 in Torreon, Coahuila, Mexico to Adela Flores and Candelario Rodriguez. His childhood years were spent in Durango, Durango, Mexico. He moved to Santa Barbara, CA in 1974.

On November 9, 1990 he married Lupe Medina. He was a father to two sons Jorge and Jose, two daughters Kenya and Ari, and his stepchildren Claudia, Manuel, and Ricardo.

Arturo worked for many successful restaurants in the Santa Barbara area, and later went on to own his own restaurant, Mai-Kai Restaurant, in Carpinteria, CA for several years. Arturo worked at Harding School preparing and serving meals to students. His dedication to students’ wellbeing drove his decision to work during the COVID-19 pandemic.

Arturo had a passion for cooking, gardening, and his soccer team: Las Chivas de Guadalajara. He enjoyed taking daily walks in his neighborhood with his wife and three dogs. He also loved to watch wildlife documentaries, Spanish-language films, and to sing banda songs at the top of his lungs. He was known for his infectious smiles, patience, kindness, and fervor for life.

His family is grateful to his nurses and doctors at Community Memorial Hospital who worked tirelessly to care for him.

Arturo was preceded in death by his father Candelario, his mother Adela, and his brothers, Fernando and Jorge. He is survived by his wife, Lupe; his sons, Jose and Jorge; his daughters Kenya and her husband Ronnie; his daughter Ari; his stepchildren Claudia, Manuel and Ricardo; his brothers Esteban and Mario and sister Rosa; several nieces and nephews, nine grandchildren, and one great-granddaughter.

Family and friends are invited to Memorial Service will be held Saturday, February 27th, 2021 at the JOSEPH P. REARDON FUNERAL HOME & CREMATION SERVICE, 757 East Main Street Ventura, at 10:30 AM.