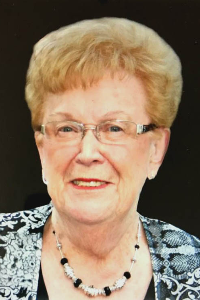 She was the mother of two loving daughters: Maryann J. Mackowiak, wife of Daniel Mackowiak of Northborough; and Marlene J. O’Day, wife of John F. O’Day, Jr. of Auburn. Her grand children and great grand children were her pride and joy. She was “Gram” to: Laura Fairbanks and her husband Michael of Westborough; Craig Mackowiak and his wife Amy of Abingdon, MD; Meghan Murphy and her husband Kevin of Andover; and Jack O’Day of Minneapolis, MN. Three of her great grand children called her “GG:” Jonathan, Gavin and Emery; and two called her “Baba:” Teagan and Maeve.

Theresa came from a large family. She was predeceased by her three brothers and two sisters. But she leaves many nieces and nephews.

In her later years, Theresa enjoyed the special friendship and companionship of Norman A. Czyzewski of Webster. Together, they made growing older much more pleasant.

Born in Oxford, MA on May 27, 1930, Theresa was the daughter of Frank and Lucy (Mikos) Dudek. She graduated from Oxford High School in 1948, and lived in Webster from the time she was married.

Theresa spent all her working years in banking - beginning with the First National Bank of Webster, and then with its successors Guaranty Bank & Trust and The Bank of New England. She retired in 1992 as an assistant manager.

Beyond family and career, Theresa was devoted to her church, The Saint Joseph Basilica in Webster, as well as to many of its activities. She was a member of the parish council; one of the founders of the Friends of Saint Joseph School Fund; and served on the Church’s bereavement committee. Theresa was a past president of the Sacred Heart Society and of the St. Joseph Women’s Club. She was also a member of the Holy Rosary Sodality and the Saint Anne Society. For several years, Theresa volunteered with the Hubbard Regional Hospital Guild.

Visitation will be held in the funeral home from 4:00 to 6:00 PM on Tuesday, February 23, and from 9:30 to 10:30 AM on Wednesday, February 24, prior to the funeral. Current health guidelines will be in place; everyone in attendance must wear a mask.

Donations in Theresa’s name may be made to the Fund for Saint Joseph School, 47 Whitcomb St., Webster, Ma 01570.