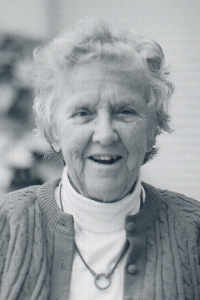 Gertrude Trumbull Burr died peacefully at home in her sleep, on Friday, February 12th, age 97, after a life well-lived. No matter how busy, her home was always open, and she found time for all. She and her husband Carleton Burr (dec. 2003) lived their lives surrounded by a very large cast of devoted family and friends.

Gertrude was born and raised in Weston, MA, the daughter of Walter Henry Trumbull and Mary Winsor Trumbull. She attended Meadowbrook School, and in a harbinger of things to come, was the quarterback of the boys’ football team. She graduated from Winsor School in Boston, and then Vassar College, majoring in Math and Engineering Physics.

After graduation in 1944, in the wartime accelerated academic program, she worked at M.I.T. in the aerospace effort, focused on calculating rocket trajectories. She was the only woman amongst 600 other mathematicians, engineers, and physicists.

In 1949, she married Carleton and moved to Mattapoisett, MA. Building community and strengthening family were their lifelong passions. She was an inspiration to her four children and a multitude of family members and friends, all the while being instrumental in developing the family business, Burr Brothers Boats. The business was a fitting continuation of her lifelong love of “messing about in boats”, which she had done since childhood sailing her Herreshoff 12, “Rosebud”.

With her indefatigable energy and can-do attitude she helped steer the business into novel endeavors, such as becoming one of the first boatyards in the country to develop a computer system tracking all accounting and operations. Her leadership in the industry also led her to become, in the 1970s, the first female Board Member of the American Boat Builders and Repairers Association (ABBRA), a national trade organization.

For her mentally disabled daughter, Gertrude co-founded a non-profit community home, which became LifeStream, Inc. Today Lifestream is an organization with a staff of over 500, and it has served thousands of developmentally disabled people and others facing personal challenges.

Gertrude’s civic involvements were too many to list. She loved working with people and was especially good at using her skills to help organizations in which she believed. Amongst these were The Garden Club of Buzzards Bay, The Unitarian Church of New Bedford, LifeStream, and The Rotch-Jones Duff House and Garden Museum.

Over the years, Gertrude was also a member of numerous Clubs, which made for an active sporting and social life. She helped run various USTA tennis tournaments and managed to collect a closet full of trophies herself. Playing well into her 80s, she left opponents impressed not only with her play but also with her sportsmanship. She would win with such grace that she left everyone smiling. She was a very elegant skier, refusing to permanently come down off the mountains until nearly ninety years old. Her enthusiasm for hopping on board to go sailing continued into her 90s, while her rowing prowess lasted nearly to the end.

Somewhere, she and Carleton are together sailing and serving aces.

A celebration of life is planned when warm weather arrives and COVID has abated. Donations in lieu of flowers can be made to the Rotch-Jones-Duff House & Garden Museum (www.rjdmuseum.org; 396 County St., New Bedford, MA 02740) or the Mattapoisett Community Sailing Program (www.mattsail.org; PO Box 947, Mattapoisett, MA 02739). For online guestbook, visit www.saundersdwyer.com.