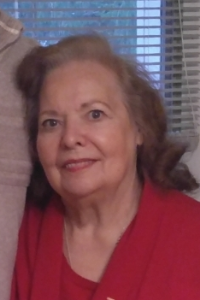 Dolores died at Life Care Center of Merrimack Valley on February 18, 2021, after a period of declining health. Dolores was born in Cambridge. Massachusetts. She moved to Somerville as a young girl and attended school there, graduating from Somerville High School. She worked at Hyde Rubber Company after High School and then worked at Raytheon, where she stayed until moving to Belmont after she married.

Dolores Met her husband, Roland, at Chelsea Naval Hospital in 1951. Little did she know that visiting her friend's beau, who was Roland’s roommate at the hospital, would lead her to meet her husband. Their romance moved fast. They met in the summer, got engaged in September and were married the following July. Dolores and Roland would have been married 69 years this July and had two daughters, Darlene and Lisa.

Later in life, Dolores and her husband Rolly were very involved in the VFW, the Ladies Auxiliary and the Sons of Italy. She enjoyed traveling and went on several trips with her friends that she met through these organizations. She loved yard sales and truly enjoyed the thrill of the hunt to find her latest treasures. She entertained quite frequently in her younger years and always enjoyed using her fine china pieces. She was an avid animal lover and enjoyed attending religious mass when able.

As life progressed and her family grew, her youngest daughter Lisa married and she finally had a son in the family. She treated him as if he were her own. Her daughter Lisa would joke that she liked him best of all. Dolores found her true joy in life when she became a grandmother. Her two grandsons meant the world to her and nothing stood in the way of her being with them. They sold their home in Belmont after 40 years and moved to Billerica in 1997 to be able to help care for them. Most grandmothers carry pictures in their wallet of their grandchildren, but Dolores carried 5X7 glossies of them. She was so proud and would talk about them to anyone who would listen.

In the last few years Dolores’ health began to decline and she was not able to do most of the things that she loved. She was able to remain at home until the last month of her life when her care required more professional help. Her daughter Darlene retired and was able to care for her at home for as long as possible.

Her Funeral Mass will be celebrated in St. Theresa Church, 466 Boston Road, Billerica on Tuesday, February 23, 2021, at 10 AM. Relatives and friends are most welcome to attend. Interment will be held in the Fox Hill Cemetery in Billerica. If you plan on attending Dolores' funeral mass, please register at HTTPS://cli.re/ccb-funeral-signup. For additional information, please visit, www.burkemagliozzi.com.

In lieu of flowers Dolores’ family requests that donations be made in her name to two organizations that were very important to her, St Jude's Children's Hospital, 262 Danny Thomas Place, Memphis, TN 03105 or The Massachusetts Humane Society, P.O. Box 850177, Braintree, MA 02185.