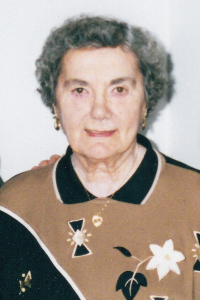 Loretta E. Auger, 100, of Woonsocket passed away peacefully Saturday evening, February 13, 2021, at Overlook Nursing and Rehab Center in Pascoag. She was the loving wife of the late Robert E. Auger. They were married on September 2, 1940 and shared almost 75 years together until his passing in June 2015.

Born in Woonsocket, she was a daughter of the late Amasa and Georgianna (Petrin) Barrie. She was a lifelong resident of Woonsocket.

Loretta was a member of the St. Joseph’s Senior Citizens Club and participated in many activities for over 30 years at the Woonsocket Senior Citizens Center. She also volunteered for Meals on Wheels.

With her husband, Loretta travelled extensively throughout the United States, Canada, and England. She had a sunny, optimistic outlook on life and cherished her role as a grandmother.

Loretta was a talented seamstress. She created items for her family including gowns, coats, and afghans.

Loretta is survived by a son, Robert P. Auger and his wife Martina of Salt Lake City, Utah, two daughters, Vivian Gentz and her husband Douglas of Sand Springs, Oklahoma, and Diane Demers and her husband Harold of Greenville. She was the sister of Muriel Vincent of Michigan and the late Amasa and Normand Barrie, Georgianna Guernon, Doris Landry, and Jeannette Dubois. She is also survived by her grandsons Paul and Marc Auger and Benjamin and Stephen Demers, 8 great-grandchildren, many step great-grandchildren and many nieces and nephews and their families.

Loretta’s funeral services were private. She was laid to rest in St. James Cemetery in Manville alongside her husband Robert.

In lieu of flowers, memorial donations may be made to the Rhode Island Community Food Bank, 200 Niantic Ave., Providence, RI 02907 or www.rifoodbank.com.

Arrangements were in the care of the Menard-Lacouture Funeral Home, 127 Carrington Ave., Woonsocket, RI www.menardfuneralhome.com.