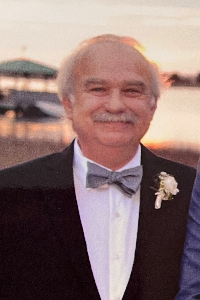 G. Douglas Looper passed away on February 18, 2021 surrounded by his family in the comfort of the home he loved.
He was born on October 18, 1949 in Anderson, Indiana to George T. Looper and Anna Lee (Wilson) Looper, who survives him. He was a 1967 graduate of Highland High School and lived in Anderson his entire life.
Survived by his wife of 47 years, Pamela (Robinette) Looper, together they owned and operated The Arrangement Flower Shop for more than 35 years. He loved the flower business and maintained that delivering flowers to the people of Anderson was the best job in the world.
His children, Autumn and Dustin were the light of his life. His oldest, Autumn (Jeffrey) Gasior reside in Indianapolis and Dustin (Marcene) Looper reside in Mt. Pleasant, South Carolina with their two children William and George.
Doug is also survived by his brothers, Mark (Diane) Looper of Daleville and Randy Looper of Denver Colorado, his sister-in-law Carol (Eldon) Wentz, his brother-in-law DuWayne Robinette, as well as several nieces and nephews. His brothers have fond childhood memories of beating the crap out of each other all the way from Pitt Street to Jay Drive, as well as summers at Lake Shafer where they always behaved themselves following the good example set by their older brother, Doug.
Doug is preceded in death by his father, mother-in-law Pauline (Robinette) Paulson, and sister-in-law Bonnie (Allison) Robinette.
He will be missed dearly by his many friends and family and lives on in their cherished memories.
A memorial service will be held at 1:30 p.m. Tuesday, February 23, 2021 at Rozelle-Johnson Funeral Service with Ned Clark officiating. Visitation with the family will be held from 11:30 a.m. to 1:30 p.m. on Tuesday at the funeral home.
As a flower shop owner, “in lieu of flowers” was not a phrase to be spoken. Please consider supporting The Arrangement Flower Shop and send all the blooms in tribute to a beautiful life, well lived.
Post online condolences at www.rozelle-johnson.com.