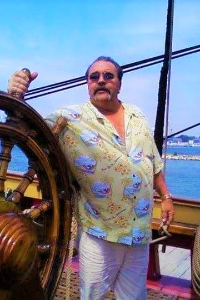 FALL RIVER… Steven A. Brunette, 69, of Fall River passed away February 16, 2021 at his home.
He was the husband of the late Virginia Brunette.
Born in New Bedford, he was a son of the late Francis R. Brunette and Estelle (Caton) Brunette Hudson. He had moved to Fall River on 2010.
Mr. Brunette was a veteran of the United States Navy, serving during the Vietnam War. He had worked as a Sheet Rocker in the local construction industry. Steven was artistic and had enjoyed playing the drums, music and spending time with his family. He would often visit with patients in nursing homes, dressed as a Victorian Santa Clause.
Survivors include his children: Steven Brunette and Lea Brunette; his sisters: Frances R. Courchesne, Sharon A. Kelley, Joyce M. Eugenio and Deborah L. Perry; his grandchildren Ava, Christopher and Fox, several nieces and nephews. He was the brother of the late David and Ronald Brunette.
Service to which relatives and friends are invited will be held at 4:00P.M. at the SOUTH COAST FUNERAL HOME, 1555 Pleasant Street, Fall River, MA., Saturday, March 13, 2021. Calling hours will be from 2:00P.M. to 4:00P.M., Saturday , March, 13, 2021. Interment will be private.