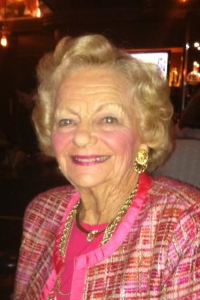 Barbara C. Gephardt passed away at Bethel Pointe Rehabilitation Center in Muncie on February 15, 2021.
Barbara was born in Anderson on November 7, 1926 to Carl and Mary Cleaver. Barbara married David A. Gephardt, DDS in 1949. He preceded her in death on May 3, 2010.
Barbara and David are survived by their children: David C. Gephardt, DDS of Anderson, Stephen A. Gephardt, MD (Tamara) of Las Vegas, NV, and Susan Allardt (Jay)of Muncie. Barbara is also survived by 13 grandchildren and 21 great-grandchildren.
She was preceded in death by her parents, daughter-in-law, Beth Faris Gephardt, sister, Mary Jane Gemberling, brother-in-law, Warren Gemberling, brother-in-law, Thom Gephardt and sister-in-law, Mary Ann Shoemaker.
Barbara graduated from Anderson High School in 1944 and Indiana University in 1948, where she was a member of Kappa Kappa Gamma Sorority. She was a long time member of Central Christian Church and Anderson Country Club. Barbara was active in Kappa Kappa Kappa Sorority, Clio Club, Mid Century Club, Anderson Visiting Nurse Board and a long time board member and president for United Faith Housing. She was very proud of the creation of Vermillion Place in downtown Anderson during her presidency.
Barbara loved spending time with her family at Lake Wawasee and Hollywood Beach Florida. She truly loved every day and was always telling her children to live each day to the fullest. Her life was lived through pink colored glasses and she never had a bad day. She was always amazingly positive and loved her family deeply. She will always be in their hearts and memories will endure a lifetime.
Private family services will be held at a later time with burial at East Maplewood Cemetery.
Memorial contributions may be given to Central Christian Church, 923 Jackson Street, Anderson, IN 46016 or the charity of your choice.
Rozelle-Johnson Funeral Service handled arrangements.
Post online condolences at www.rozelle-johnson.com.