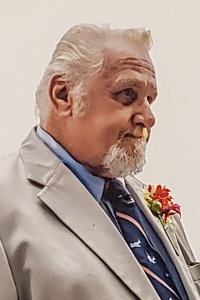 Gordon was born on December 20, 1937 in Ashland, NH, the son of the late Charles and Estelle (Brady) King.

Gordon worked as an editor and reporter for the Laconia Citizen for most of his career. He was involved with many other papers throughout the state and the country.

Gordon was devoted husband, father, and grandfather. He was an avid reader, writer, gardener, modeler, and conversationalist. He was a friend to all he met.

Gordon is survived by his sons, Brooks King, Gordon D. King Jr., and Shane T. King and three grandchildren, Amy, Aleesha, and Erica. In addition to his parents, Gordon was predeceased by his wife, Mary (McCormack) King; his son, Tony King; and his daughter, Parris King.

Services will be held at a later date.

In lieu of flowers the family suggests memorial donations in Gordon’s name be made to the Laconia Public Library, 695 Main Street, Laconia, NH 03246.