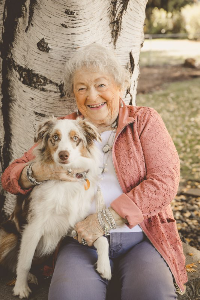 Eleanor “Ruth” Kincanon, age 83 of Prosser, entered into rest on February 14, 2021 at Kadlec Regional Medical Center in Richland. She was born to William Lawrence Haddock and Clara Stalter on February 4, 1938 in Pilot Point, Texas. She was raised by her grandmother Tenni Stalter and educated in Ada, Oklahoma. Ruth graduated from high school, married Keith Massey and had their first child, all in 1956. The family settled in Prosser in 1969.
Ruth worked as a matron for the Benton County Sheriff's Department where she met Don Kincanon and then married in 1972. Together they built Ruth’s dream. A facility to breed and train horses. She was a very successful businesswoman and was well known in the horse industry. One of her students won the World Equitation Championship title.
Ruth attended Calvary Baptist Church for many years. She worked at Rodman’s Shoe Store, was a bank teller at Peoples Bank, and a receptionist at Chapman Lampson Insurance Agency before she retired to concentrate on her business. Ruth was very active in PTA and 4-H, always teaching and being an mentor for children. She was known as the “Grammy” of Elm Street.
Ruth was very family oriented and enjoyed entertaining her family and friends and holiday gatherings were graciously prepared with perfection and class in every detail. She loved spending time with her grandchildren and great-grandchildren, lovingly teaching them the art of gracious living and old-fashioned cooking.
She is survived by her three daughters, Diana Tolcacher of Prescott, AZ, Terri Hecht (Sam) of West Richland and Lisa Hamilton of Richland; seven grandchildren, Desiree, Jake, Ava, Scott, Kristin, Kyleigh and Jeff; Michelle Osborn and Dale Ziegler who were a huge part of her life and like children to her; and her special and faithful companion, Lil Bit. She was preceded in death by her father, Lawrence Haddock, her mother, Clara Stalter, her first husband, Keith Massey and her second husband, Don Kincanon; her Grandmother, Tenni Stalter; and four aunts.
Private family graveside services will be held in the Prosser Cemetery. In Lieu of flowers please make a Memorial contribution to Lower Valley Hospice. You may leave a message for the family at www.Prosserfuneralhome.com