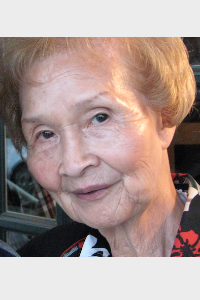 
PAPSADORE, Mary (Suzuki) Of Dedham, 98 years young, passed peacefully at home on February 14, 2021. She was preceded in death by her late husband Onofrio Papsadore and her two sons Charles (Doreen) Papsadore and Ralph Papsadore both of Dedham.

Mary was born in Tokyo, Japan and came to the USA as a Japanese War Bride. While her husband was deployed in the US Navy, Mary lived with her Italian in laws and became a great Italian cook. She could make the best marinara sauce, meatballs, homemade raviolis, and pizzelle cookies but she is best known for her Japanese fried rice. Sorry to say her children can’t replicate her recipe.

She was employed at Rust Craft Greeting Card, Dedham for over twenty five years.

Condolences may be sent to 88 Paul St., Dedham, MA 02026. Expressions of sympathy may be made to the Dedham Food Pantry or the charity of choice.

She will be laid to rest next to her beloved husband at Knollwood Memorial Park Canton.

Due to Covid, a celebration of Mary’s life will be announced at a later date.