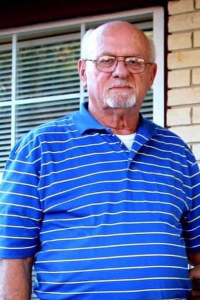 Funeral services will be held 2 PM, Saturday, February 20, 2021, at Crossview Baptist Church in Fitzgerald, Georgia with the Rev. Jeff Parmer, the Rev. Gary Mimbs, and the Rev. Harris Johnson officiating. Interment will follow in Evergreen Cemetery. The family will receive friends one hour prior to the service in the sanctuary on Saturday.

Mr. Davis was born August 28, 1941, in Jackson, Michigan, to the late L.M. & Helen Lucille Smith Davis. He was a 1959 graduate of Clearwater High School in Clearwater, Florida. There he was the quarterback and football hero of the former Judy Midkiff. Following graduation, he served his country honorably in the United States Air Force, being stationed in Spain. After his 4-year tour of duty, he returned home to Florida. He and Judy had their first date in December 1963 and were married on February 15, 1964 in the Nazarene Church in Clearwater. He began his career at Milton Roy in St. Petersburg, Florida. He would go on to manage plants for Lithonia Lighting in Cochran and Briggs & Stratton in Perry before being transferred to Briggs & Stratton headquarters in Wisconsin where he managed the lock and key plant. Following his retirement, he worked for Hurd Lock and Blue Rhino, both in North Carolina. He moved to Fitzgerald in 2005, after retiring from DECOE, Inc. He was saved and baptized while living in Wisconsin due to observing the spiritual pathway his wife walked. He was an active member and deacon of Crossview Baptist Church, where he was always willing to help anyone. His passion was woodworking and he shared his talent with friends and family. He built many projects for his church and just recently crafted a cedar chest for his granddaughter’s 16th birthday. He enjoyed making yard art including Snoopy and Welcome signs.