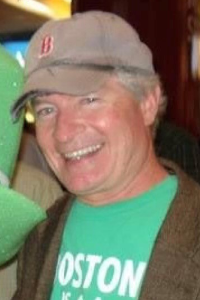 Kevin J. Grady, 64, of Charlton, passed away unexpectedly Sunday, February 14, with his loving family by his side following a short illness.
He leaves his devoted wife of 39 years, Joan (Peduzzi) Grady; his son, Daniel Grady and his wife Justine (Turcotte) Grady; two grandchildren, Connor and Anna Grady all of Charlton; his beloved mother, Mary (McNamara) Grady of Charlton; his brothers, James Grady and wife Lisa of Leicester; Paul Grady and his partner Christine Whelan of Oxford; his sisters, Marie Grady of Agawam, Sheila Hass of Agawam and Kathleen Kelleher and husband John Kelleher of Charlton, and seven nieces and nephews. He was predeceased by his beloved father, Martin Grady of Worcester, and sisters, Eileen and Patricia Grady of Worcester.
A graduate of Worcester State University, Kevin served as Government Controller at David Clark Company of Worcester, where he worked for 42 years, frequently traveling the country to help negotiate contracts on behalf of the company - an aerospace equipment manufacturer for NASA and the U.S. Air Force. An avid sports fan, he was a Boston Celtics season ticket holder and Providence Friars aficionado. When his only son was a boy, he would often arise at 5 a.m. on the weekends to take him to play in hockey tournaments throughout New England.
He enjoyed taking his father to the annual Father’s Day outings to see the Boston Red Sox along with his brothers. But one of the greatest and simplest pleasures in his life was casting a line into the waters of the Atlantic Ocean off the Cape Cod National Seashore and reeling back bluefish and striped bass under the warm summer sun. Another great pleasure was traveling to the other side of the Atlantic Ocean with his family to visit the homeland of his father and mother in County Mayo, Ireland, where his mother’s ancestral home overlooks the ocean and where her brothers caught fish from currachs, a long slender boat, with “sea pigs”, or seals, often in their wake.
Kevin was a generous, gregarious, easy-going conversationalist who was as adept at regaling friends and family with his sharp wit as he was at negotiating complex contracts. When he wasn’t fishing the Atlantic Ocean in the summer, he often enjoyed fishing closer to home with his late father-in-law, Robert Peduzzi. Growing up, Kevin’s family of six siblings was sometimes referred to as “the Grady Bunch”. Now, the six are five but he will forever have a place in their hearts and the extensive group of family and friends who loved him.
Funeral arrangements are being handled by O’CONNOR BROTHERS FUNERAL HOME, 592 Park Avenue, Worcester, where Kevin and family and friends frequently gathered outside to watch the annual St. Patrick’s Day Parade.
A visitation will be held on Thursday, February 18th at 10:00 a.m. in Our Lady of the Angels Church, 1222 Main Street, Worcester followed by his funeral Mass at 11:00 a.m. Burial will be in St. John’s Cemetery, Worcester. In lieu of flowers, memorial contributions may be made to St. Jude Children’s Research Hospital, 501 St. Jude Place, Memphis, TN 38105.