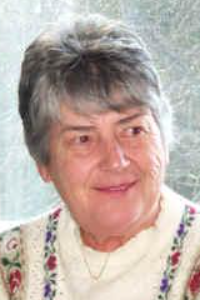 MEREDITH---Phyllis Elizabeth Harding died on Thursday, January 14, 2021, one month shy of her 85th birthday, from natural causes at Golden View with her family by her side.

Phyllis was born in Yarmouth, Nova Scotia, Canada, in 1936, the daughter of the late Norman and Ruth (Corning) Pitman. After finishing high school, she married Sy Harding and they moved to New England. When it was time to start a family they moved to the Lakes Region where Phyllis was actively involved in her children’s lives, volunteer work, and working as a bookkeeper for Sy’s businesses. She was the Nursery Guild secretary, a Brownie leader, a Cub Scout mother,and Treasurer and Race Secretary of the Gunstock Ski Club.

Phyllis encouraged and taught family and friends to play golf, especially younger generations. She was an enthusiastic volunteer for the NHWGA Junior Championships, encouraging young ladies to love the game. She was the driving force of the Jim Buckley Memorial Tournament, raising thousands of dollars over the years for the benefit of the Gilford High School Golf team.

When Primary Lateral Sclerosis forced her to pack away the clubs, she continued going to her Golf Ladies’ Lunch. She also honed her love of jigsaw puzzles, crossword puzzles, Sudoku, and Words With Friends allowing her to keep in touch with distant friends.

Phyllis will be profoundly missed by her younger brother Gerald and his wife Charlotte of Nova Scotia, her three children, Linda Elizabeth of DeLand, FL, Patti of Gilmanton, NH, and Jeff and his wife Nikki of Meredith, NH; 8 grandchildren, Aimee Elizabeth and husband Curtis of CT, Patrick and wife Sabrina of FL, Melanie of UT; Parker, Pamila, and Erik of FL, Ellie Elizabeth and Dana of Meredith; and two great-grandchildren Leila Elizabeth and Emma of CT. She also leaves behind many dear friends and extended family members. Phyllis was predeceased by her brothers, Robert and Donald, and her significant other Jim Buckley.

A Celebration of Life will be held during the summer when this dang pandemic is over and it is safe together.

In lieu of flowers, the family suggests memorial contributions in Phyllis’ name be made to the NHWGA Charitable Foundation, PO Box. 1566, Derry, NH 03038.