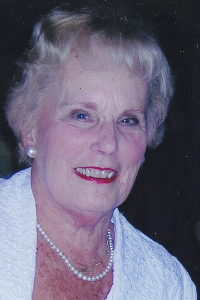 Laurale’ R. Johnson, 88, passed away peacefully surrounded by family, on Sunday, February 14, 2021. She was born on September 13, 1932 in Anderson, the daughter of Harold E. and Laura (Fisher) Rozelle. She was a 1950 graduate of Anderson High School, attended Ward-Belmont College, and later graduated from Indiana University with a degree in elementary education. She was a member of Delta Gamma Sorority.
Laurale’ worked for many years in the family business, Rozelle-Johnson Funeral Service, which was established by her parents in 1931. She was active in the Anderson community, having served on the boards of the Anderson YWCA and Anderson Symphony Orchestra. She was a member of AAUW, Anderson Fine Art Center Women’s League, Altrusa Service Club, Kappa Kappa Kappa Sorority, Mounds Kiwanis Club, Tourist Club, Daughters of the American Revolution, and Daughters of the American Colonists. She was a faithful member of First Church of Christ, Scientist, Anderson. Laurale’ enjoyed the arts and never missed an opportunity to attend local area concerts and theater productions.
She is survived by her daughter, Laura (Bill) Beeler and her son, Harold (Brooke) Johnson and three granddaughters, Lauren Beeler, Julia Beeler and Arabelle Johnson.
Laurale’ was preceded in death by her husband, Russell B. Johnson in 2013.
Private family services will be held with burial at East Maplewood Cemetery.
Memorial contributions may be given to the Anderson Symphony Orchestra, 1124 Meridian Street, Anderson, IN 46016, Anderson’s Mainstage Theatre, P. O. Box 864, Anderson, IN 46015 or Anderson University- "Called to Soar" 1000 E. 5th Street, Anderson, IN 46012.
Post online condolences at www.rozelle-johnson.com.