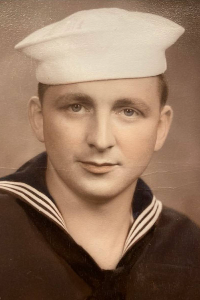 In September 1951, he married Mary L. Griffin in Worcester, MA. Leaving the Navy, he moved back to Londonderry and raised his family on Adams Road. He was self-employed as a heavy-equipment mechanic and part-time farmer. In 1983, he retired and moved to Jefferson, NH where he worked 6 years for the town of Lancaster. He and Mary also lived in Danbury, Epsom, and Derry.

Armand is survived by his eight children: John and his wife Elaine, William and his wife Judy, Raymond and his wife Sandra, Philip, Rosemary and her husband Kenneth, Elizabeth and her partner Paul Raiti, Peter, and Armand Jr. and his wife Christine. He is also survived by many grandchildren, great-grandchildren and several nieces and nephews. He was predeceased by his wife of 57 years in 2008. He was also predeceased by eight brothers and six sisters: Lillian, Adrienne, Maurice, Jeannette, Ludger, Lawrence, Claire, Benoit, Raymond, Rita, Lionel, Theresa, Gerard, and Roger.

His family wants to thank the staff at The New Hampshire Veterans Home in Tilton for the exceptional care Dad was given after moving there in 2015.

The family will greet friends on Thursday, February 18th from 10:15am – 11:00am at St. Raphael the Archangel Parish, 103 Walker St., Manchester, NH. A Mass of Christian Burial will follow at 11:00am in the Church. The burial will follow at 1:00pm in the NH State Veteran’s Cemetery in Boscawen. In lieu of flowers, memorial contributions may be made to the Salvation Army, 18 Folsom Road, Derry, NH 03038. The Peabody Funeral Homes and Crematorium, 15 Birch St., Derry is assisting the family with arrangements.