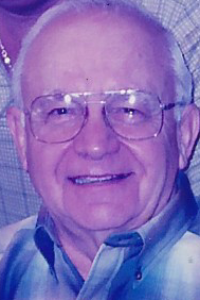 Edward R. Piana, age 90, of Canton passed away February 13th at Cornerstone in Canton. Ed was born in Canton and was a lifelong resident of the Town. He graduated from Boston College High School, Northeastern University, and the Advanced Management Program at the Harvard Business School. Ed was Executive Vice President at BayBank and President of BayBank Credit Corporation. After a 37 year banking career, he then helped found Credit Corporation of New England, a business he operated until he retired.
Ed was a veteran of the United States Army, having served in Korea 1952-53. He was deeply committed to veterans’ causes. He was a proud member of the Canton Veteran’s Service Department Honor Guard. He chaired the Massachusetts Korean War Veterans 50th Anniversary Committee and delivered one of the opening addresses at the dedication of the Korean War Veterans Memorial at the Charlestown Navy Yard in 2005.
Ed was the beloved husband of the late Ann P. (Collins) and the revered father of James E. and his wife Diane of Raynham, Dr. Robert N. and his wife Cynthia of Nashville, TN and Stephen A. and his wife Lynn of Canton. “Nonno” was adored by his seven grandchildren: Danielle, Christine, Matthew, Michael and Kevin Piana, as well as Mark Piana and his wife Arch Vamanrao, and Dr. Lauren Piana and her husband Dr. Adam Wray. Ed is also survived by his beloved niece, Margaret Rubenacker, her husband Larry, and their two children, Anna and Joey of Canton, and many nieces and nephews.
Funeral mass will be celebrated at St. John the Evangelist Roman Catholic Church in Canton Tuesday morning, February 16, 2021 at 10:30. Visiting hours will be held at the Dockray & Thomas Funeral Home, 455 Washington St., Canton Tuesday morning prior to the mass from 9:00 to 10:00 am. Due to the current Covid 19 restrictions only 20 guests will be allowed within the funeral home at once, masks are required and guests should bring their own pens to sign the register book Burial St. Mary’s Cemetery, Canton. In lieu of flowers, donations may be made in Ed’s memory to the St. John the Evangelist Church, 700 Washington St., Canton, MA 02021.