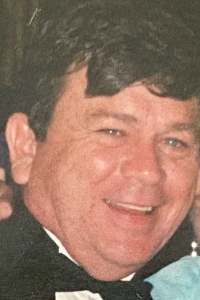 John M. Ellsworth, Jr., 74, "The Duke" of Tewksbury, passed away Wednesday, February 10, 2021,He was surrounded by his loving family at home after courageous battle with Lung Cancer.

He was the beloved husband of Margaret M. (Cluett) Ellsworth, with whom he shared 36 years of Marriage. He was born April 8, 1946, the eldest child of John M. and Helen (McGurn) Ellsworth. Born and raised in Medford graduating from Malden Catholic High School.

Mr. Ellsworth proudly served with the United States Navy from 1964 to 1969 as an electrician. After his honorable discharge he began his career with the Everett Police Department where he was affectionately known as "The Duke". He was later promoted to Sergeant and retired as The Prosecutor for the Everett Police Department in Malden District Court. He was always very proud of his service to his country and community and will be remembered fondly for his many years of hard work.

He also loved Friday lunch with the guys, Country Music and sports, but most of all his grandchildren and all their accomplishments.
Besides his loving wife, Margaret, he is survived by his children, Matthew Ellsworth and his wife, Cecilia, of Derry, NH, John Ellsworth and his wife, Theresa, of Derry, NH, Tina English and her husband, Paul, of Newmarket, NH, Laura Henckler and her husband, Charles, of Chelmsford, Danielle Chaput and her husband, William, of Tewksbury, as well as extra daughter Beth Fronczak of Peabody; his beloved grandchilddren, Paul, Katie, Chelsey, Chuckie, Cole, Billy, Gracie, and Noelle; his brother, Barry Ellsworth of Danville, N.H.; his two sisters, Joann Crockett and her husband, Phillip, of Wakefield, Julie Ann Cooke and her husband, Mark, of Tyngsboro; as well as many nieces and nephews and was predeceased in death by his sister, Patricia Carraher. He will be lovingly missed by all.

WHILE WEARING A MASK AND FOLLOWING SOCIAL DISTANCING GUIDELINES, YOU ARE INVITED TO HIS CALLING HOURS FROM 4 UNTIL 8 P.M. ON MONDAY.

HIS FUNERAL MASS WILL BE OFFERED TUESDAY AT SAINT WILLIAM'S CHURCH, TEWKSBURY AT 10 A.M.. BURIAL IN THE TEWKSBURY CEMETERY.

CONSIDER HIS GUEST BOOK TAB ABOVE NEAR HIS PICTURE