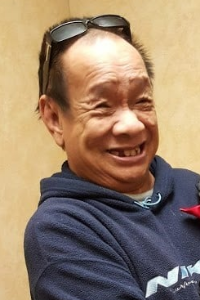 Saroun Kouch, 75 of Lowell, passed away unexpectedly on Friday, February 5, 2021. He was the widower of the late Samoun Yin who passed away in 2005.

He was born in Cambodia on May 12, 1945, where he lived for many years before coming to the United States in the 1980’s, settling in Vermont, and later in Oakland, CA, before settling in Lowell, MA since 1998.

Saroun was employed in food service for many years before his retirement. He loved taking walks and fishing. He also enjoyed socializing amongst his neighborhood friends. He was extremely devoted to worshiping at the Glory Buddhist and attending services at the temple. Above all else, he cherished time spent with his family, especially his children and grandchildren.

He is survived by his 3 children and his 5 grandchildren.

His families memories: "He was always laughing and smiling, constantly joking around and never spoke ill of anyone. We've been told by family members and strangers alike that they only had fond memories of my father. That he was humble, kind, with a jolly disposition, and a prankster personality that was constantly in motion with a smile on his face. We never realized how many people's lives he's touched and impacted until his unexpected passing. We would like him to be remembered that way."

DUE TO COVID-19 RESTRICTIONS, HIS FUNERAL SERVICES WILL BE HELD PRIVATELY. ARRANGEMENTS BY THE MCDONOUGH FUNERAL HOME, 14 HIGHLAND STREET, LOWELL, MA 978-458-6816.

Consider visiting his guest book, click guest book tab near his photo above.