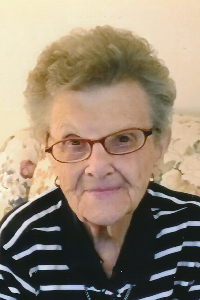 
Whitman - Louise F. (Adams) Quilty 96, a longtime resident of Whitman, died Tuesday February 9 in the Life Care Center of West Bridgewater, where she was involved in countless activities and cherished by all the residents and staff alike.

Born in Boston and raised in Dorchester, she was the daughter of the late Clayton and Anna (Davenshire) Adams.

Louise was a familiar face in the Whitman community for over sixty-six years and prior to her retirement had worked many years in the cafeteria of the Whitman school system.

She was a beloved member of the Grace Anglican Church of Bridgewater.

She enjoyed gardening and baking, and created many lovely crocheting and macrame items which she happily shared with family and friends. Her greatest joy was spending time with her loving children, grandchildren and great grandchildren.

She was predeceased by her husband Robert A. Quilty, Sr. and survived by her children Robert A. Quilty, Jr. and his wife Karyn of Attleboro, Dorothy L. Wilhelm and her husband Robert of Whitman, and James S. Quilty and his companion Cheryl Lawson of Whitman. She is also survived by her grandchildren Michael, Melissa, Scott, Sarrah, Delia and James Jr. as well as eleven great grandchildren and several nieces and nephews. She was the sister of the late Paul Adams, Dorothy Price and Frank Adams.

All services will be private and a celebration of her life will be held at a later date.

Donations in her name may be made to the charity of one’s choice.