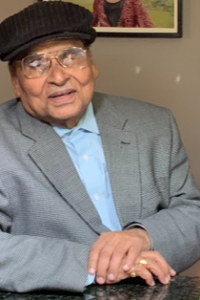 Mr. T.C. Jacob, son of Mr. Cherian Chacko & Aleyamma was called to eternal abode on Feb. 9th, 2021 at the age of 90. He was born in Mepral, a small town in Kerala, India and hailed from Pathinanchil House. He was one of 8 siblings who lived to adulthood. He completed his schooling in Kerala and then moved to Calcutta, India for higher studies in 1958. He enrolled in college to study commerce but soon felt his passion was elsewhere and moved to Kharagpur, West Bengal instead, to study Mechanical Engineering. His first job was in Indian Railways, five years later he moved back to Calcutta to work for Metal Box India Ltd. and continued to work there for the next 35 years.

Mr. Jacob, or ‘Apa’ as he was fondly called by his family was a devoted and loving husband and father. As a youth, he was fascinated in bodybuilding and competed winning him regional titles. He was an avid sportsman and played football and field hockey during his younger days. An excellent card player, he mastered the game of 56. He was a simple and kind man with an infectious smile on his face which drew people to him.

Mr. Jacob is survived by his wife, Ammini (Anna) of 56 years, daughter Elizabeth and her husband Vijoy Abraham of Andover, MA and son Jeryn Jacob and his wife Susan of New York. He has three granddaughters, Michaela Abraham, Karina Abraham and Anjali Jacob.

Due to the current Covid19 pandemic, funeral services will be privately held.

Arrangements have been entrusted to the Burke-Magliozzi Funeral Home of Andover.