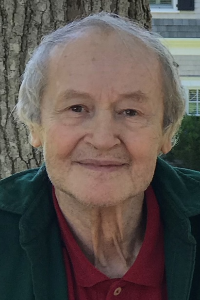 Michael V. Economou, 84, formerly of Shrewsbury, passed away peacefully on February 8, 2021. Michael was born in Kifissia, Greece, and lived there until his thirst for mathematics and engineering, brought him to Worcester Polytechnic Institute in 1956. Michael was the son of Vasilios Economou and Elly (Pasathakis) Economou, from Greece. Michael, who was also affectionately known by his great nieces and great nephews, as “Brother Mike” is survived by his two sisters Mary (Economou) Kiritsy of Shrewsbury and Stella (Economou) Christoforo of Kifissia, Greece. He also leaves behind, three nephews and their spouses Charles and Christine Kiritsy of Paxton, William and Sylvia Kiritsy of Holden, Christopher Kiritsy and Molly Owen-Kiritsy of Newton, and three nieces Anna Kiritsy-Tsitsilianos and Emmanuel Tsitsilianos of Worcester, Nancy Chistoforo and Panagiotis Pollalis of Kifissia, and Eleni Christoforo and Nicholas Sofianos of Kifissia. “Brother Mike” is the great uncle to 11 great nephews and 5 great nieces, residing in the U.S. and Greece. Michael is predeceased by his brother-in-law Paul Kiritsy, who Mike considered the big brother he never had, and his beloved niece Helen Kiritsy.

Michael received undergraduate and master’s degrees in Mechanical Engineering with high honors from WPI in 1961. Instead of accepting a prestigious fellowship on the west coast, Michael dove head-first into the entrepreneurial realm, joining Mosaic Fabrications, an emerging fiber optic company headquartered in East Brookfield, Ma and co-founded by Paul Kiritsy in 1956. Within his first year with the company, he was asked to establish a new west coast operation of Mosaics, where he successfully built-out capabilities to develop and manufacture components for their fiber optic systems. Upon returning to the headquarters in East Brookfield, Michael took up residence in Sturbridge, Mass, and was a significant contributor to the meteoric rise of Mosaics, until its sale in 1967 to Bendix Corporation. Michael consulted in the optical industry for several years until he again teamed up with Paul and his partners in a new fiber optic communications venture called 1984, Inc., which was successfully sold to Polaroid Corporation in 1983. After a short time at Polaroid, Michael continued consulting in the Fiber Optic industry across the U.S. and Europe until he retired in 2006.

Michael loved to travel throughout Greece, enjoying the beauty of his homeland with friends and family. He cherished time spent with family, visiting his sister Stella in Kifissia, cousin Falia Stergiou in the port town of Rafina, Greece, and cousin Katie Sigalas in Kolonaki, Athens. Later in retirement, Michael continued his love for family, spending time with his beloved sister Mary and her late husband Paul in Shrewsbury, MA, where “Brother Mike'' would be a welcomed participant in all of the family celebrations and reunions in Cape Cod.

Michael was an amateur photographer and enjoyed classical music, discovering the similarities of the patterns between math and music. Michael was a man of faith and steward of the Greek Orthodox Church. His religious underpinnings were formed by intense study of Greek Orthodoxy, obtaining a scholarly understanding of the religion. To further his appreciation for the Greek Orthodox faith, he would often worship in the many beautiful ancient churches and monasteries throughout Greece as well as his local congregation, Saint Spyridon Greek Orthodox Cathedral in Worcester. Michael was a voracious reader, enjoying many topics and was well versed in many areas and subjects. He was a gifted storyteller, patiently and with linear precision, reviewing all aspects of a particular topic, that if standing, would compel the listener to grab a chair to hear. After a conversation with “Brother Mike”, you always came away a little bit smarter. One of his many endearing qualities was his ability to empathetically recognize someone who was troubled and, with genuine care and thought, ease those in pain and most often while no one was watching. He was extraordinarily considerate of his sisters in every way and loved his nieces and nephews and family with all his heart. He was a kind, gentle, decent, intelligent soul, who, “By the Way”, was brilliant at making each person feel special.

On behalf of “Brother Mike”, we would like to thank the caring and compassionate nursing staff and aides at the Holy Trinity Healthcare Center, the staff at Davitas Dialysis on Shrewsbury Street and his Doctors, Nedelescu, Martin, and Kumar, for their compassionate care.

Due to Covid protocols, the service will be private for immediate family but shall be streamed live at http://www.spyridoncathedral.org/live-stream/watch Private burial will follow at Hope Cemetery. Mike’s life will be celebrated with a memorial service at a later date.