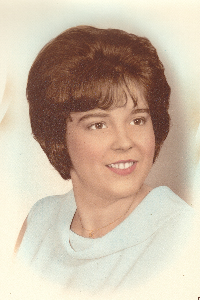 Peggy A (Waugh) Hart, 78, of Anderson died at Ascension St Vincent Hospital in Anderson on February 8, 2021, after an extended illness.
She was born on October 23, 1942, in Anderson, the daughter of Orville and Elizabeth Maxine (Stansberry) Waugh. She graduated in 1960 from Anderson High School. She was a secretary at the Adjutant General School at Ft. Benjamin Harrison, and spent nearly 30 years as a bookkeeper in Anderson, working for a local attorney before opening her own business, Hart Bookkeeping. She had a great business sense and never needed to advertise because she was so well known and respected in the community.
She enjoyed spending time with her family, and had a passion for genealogy, having spent decades researching family history. Her volunteer activities included philanthropic service through Kappa Delta Phi sorority, as well as serving on the Financial Advisory Board of the YWCA, and as treasurer of the Anderson Road Runners Club. In her free time, she traveled extensively, visiting 48 states, and took several cruises. She enjoyed puzzles and logic games, was an avid reader, and enjoyed watching mystery shows. She was a good wife, perfect mother and a friend to all.
Survivors include her husband of 53 years, Robert Hart; two children, Wendy Higdon of Carmel, and Wesley (Juliana) Hart of Lucas, TX; sister Kay Reynolds of Kansas City, Kansas, two grandchildren, Zachary Higdon and Nathaniel Higdon; several nieces and nephews. She was preceded in death by her parents, two sisters, Judith Newby, and her twin, Penny Waugh.
A private service will be held. Burial will take place at Anderson Memorial Park Cemetery. Visitation will be held on Thursday, February 11, 2021, from 4 to 8 p.m. at Rozelle-Johnson Funeral Service.
Memorial contributions may be given to Friends of Mounds Park.
Post online condolences at www.rozelle-johnson.com