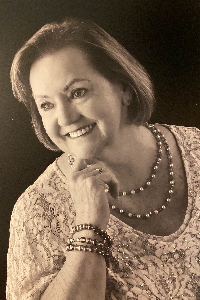 Following a valiant battle with cancer and surrounded by the family she loved so deeply, Rebecca (Becky) Powell joined her heavenly Father February 7, 2021.

A celebration of her life will be held at 2:00 PM, Wednesday, February 10, 2021 at Arbor Baptist Church with the Rev. Dr. Lloyd Stembridge officiating. The family will receive visitors one hour prior to the service. Entombment will be held at a future date.

Mrs. Powell was born April 11, 1948, in Macon, GA to the late James (Bo) T. and Bessie Mae Harden Hancock, Jr. The family relocated to Fitzgerald during her youth, and she attended Fitzgerald High School where she met Royce, the love of her life, in 10th grade study hall. They married following their high school graduation in 1966 and soon thereafter started their family, welcoming their oldest son, Michael, followed by their second son, Mark, six years later. A third son, Marcus, joined the family following his adoption in 1984. Mrs. Powell also raised her eldest granddaughter, Kandace, from the age of 10.

For over fifty years Mrs. Powell served the community as a banker, beginning her career with The First State Bank of Fitzgerald in 1969 as a bookkeeper. Her industrious nature and commitment to excellence soon caught the attention of her superiors and she earned promotion after promotion. Mrs. Powell continued working at the bank after it was acquired by Bank South in 1984 and was instrumental in the bank’s transition into a community bank in 1996. She attended the University of Georgia Banking School and graduated at the top of her class. She retired as Executive Vice President and Chief Operating Officer in 2019.

In addition to serving the community professionally, Mrs. Powell served the youth of Fitzgerald, showering them with love and sharing her fun-loving spirit. Known to all as Mrs. Becky or Mimi, she “adopted” many of the children she met, sharing their joys, listening and advocating when they faced troubles, and always leaving an impact. She also tirelessly advocated for the Fitzgerald-Ben Hill Arts Council, serving on its board for several years and volunteering at its community events.

In her spare time, Mrs. Powell loved travelling nationally and internationally with her husband, visiting nineteen states and fourteen countries. She loved both the mountains and the beach, especially if those travels included her grandchildren and great-grandchildren. She was a constant cheerleader for them as well in their extracurricular activities.

The oldest of eight children, Mrs. Powell was preceded in death by her brothers, Joe, John and Danny Hancock, and her sister, Sheila Butrum. She is survived by her husband of 54 years, Royce, who served as her primary caretaker during her battle with cancer, fulfilling the promise he made to Bo to always care for his eldest daughter. She is also survived by her siblings James (Oneita) Hancock, Jean Hancock, and Ronnie Hancock; sons Michael (Mischelle) Powell of Fitzgerald, Mark (Anna) Powell of Macon, Marcus Powell of Las Vegas; grandchildren Kandace (Chris) Carelock, Justin Powell, Harden Powell, Mary Joiner Powell, Edy Powell; great-grandchildren CJ & Sydney (Siddy Bear) Carelock.

The family expresses heartfelt gratitude to the Arbor Baptist Church and Community Bank families and the countless members of the Fitzgerald community who have provided a constant stream of love and support and Dr. Symmes Johnson for her compassionate care and empathy. Donations may be made to Arbor Baptist Church or to CURE Childhood Cancer in memory of Mary Elizabeth Paris (https://curechildhoodcancer.org/about-cure/named-funds/united-for-a-cure/?fbclid=iwar3-uj9y6ybp7lk6z1dnmi3iflubkdueuy2bnqr8kf-tejk9jla2eprmdlk)